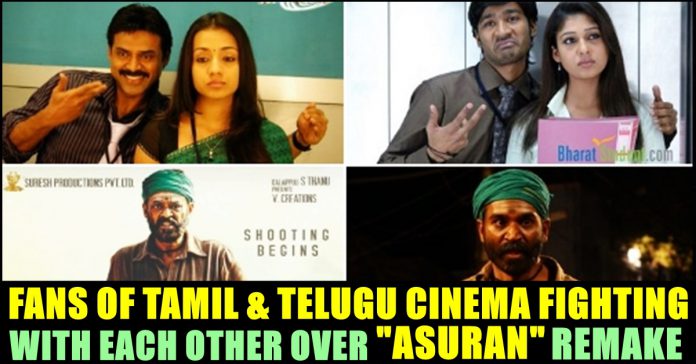 New first posters of Telugu actor Venkatesh’s Narappa surfaced on Internet yesterday. The film which is a remake of Tamil actor Dhanush’s Asuran is going to have Sreekanth Addala as the director. The characters of Manju Warrier, Ken Karunas and Teejay are yet to be finalized by the makers of Narappa.

Tamil film Asuran, directed by Vettri Maaran is one of the biggest hit of the year 2019. Being a critically acclaimed film, Asuran managed to earn 100 crores which is a rare case in Tamil cinema. Beyond Danush fans, the film is being appreciated by fans of all the categories for its intense content and the for the way the actors performed in it. Starring skilled actors such as Danush, Manju Varrier, Prakash raj and Pasupathi, the film also gave opportunities to newcomers such as Teejay, Ken Karunas, Abhirami.

The movie which revolves around the problems faced by Siva Sami, talks about many issues in the society of rural part of Tamilnadu in the early 60’s. Sivasami, whose small amount of property was targeted by a landlord, gets his elder son murdered by the landlord’s goons. Followed by this, the protagonist who carries a dark past tries to overcome the tragedy by saving his younger son from the antagonists.

Venkatesh’s new posters as Naarappa was released by the producers of the Telugu version. Check out the tweet below :

Though Venkatesh is popular among tamil audience, fans are not feeling so happy about the actor recreating Danush’s performence. Many of them think that Asuran has to be left untouched as it will have a cult follow in future. Many fans expressed their disappointment through their respective micro blogging social media site. Check out some of their reactions below :

That Kasaapu kada bhai walks out when all karis sold out pic.twitter.com/XTibZfjjwM

However Telugu fans who saw these tweets started replying to them by trolling the other actors of Kollywood industry and the remakes Tamil industry made from Telugu industry in the past. Check out their replies below :

You guys remade our arya and completely spoilt the cult classic movies with that cringe acting and monkey expressions. You attention aravas🥴 #RealAsuranDhanush pic.twitter.com/mjIA9mQfEq

What do you think on the fans of both the industries fighting with each other ?? Comment your views below !!

“He Used To Call Me As Akka” – Aspiring Model Saranya About Prashanth, A Celebrity Photographer

Abhirami of Bigg Boss fame responded to a question based on "smoking room" during her Instagram live session, saying that she's not a fool...

List Of 8 Movies That Showed Women As ‘Rehabilitation Centre’!!