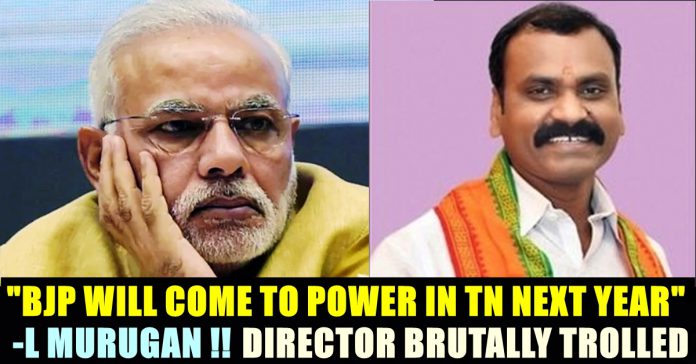 Tamilnadu BJP’s state leader L. Murugan condemned the youtubers who made ill statements regarding Lord Murugan, followed by the protest that took place in front of his house in Koyambedu. He who met the press reporters after the protest, said that those who involved in abusing Tamil lord Murugan should be arrested and added that their youtube channel must be banned. He also requested police officials to find the master mind behind their act and requested them to remove all their videos.

On seeing this news update, tamil film director C.S Amudhan who is known for making Tamizh Padam 1 & 2 compared the BJP party with the 12th students who got lower marks in their final exams. The Directorate of government exams of Tamil nadu declared the TN HSE March 2020 exam results today on its official website. The students who appeared for the 12th examinations are advised to visit the official website of the Board to check and download the results.

To all those who just got their board results— congratulations to those who exceeded their expectations and aced it . 👌👌👍👍.. and to the rest I want to say I got 58% on my board exams.. The game has not even started yet my dear friends ❤️❤️🤪🤪🚀😆🙏🙏 pic.twitter.com/lLY7w2S63y

Meanwhile, filmmaker C.S Amudhan found a new way to encourage the 12th students. He shared the statement of BJP leader Murugan and asked the 12th students not to lose hope by indirectly denoting the blind confidence of BJP leaders on forming a government in Tamil nadu in near future. His tweet also denoted that the political party is receiving lowest number of votes in the state for past several years. “Students, scoring very low marks should never lower your self-confidence.” read the tweet of him.

This tweet from Amudhan tickled the laughing bones of many of his followers and few of them termed him as DMK’s blind supporter as well. Comment your views on this sarcastic tweet of the filmmaker !!

Previous articleRJ Vignesh Replied To Those Who Spewed Hatred At Him For His Statement On “Karuppar Kootam” !!
Next articleMan Stripped For Girlfriend In Whatsapp Video Call & Lost Rs.22,000 !!