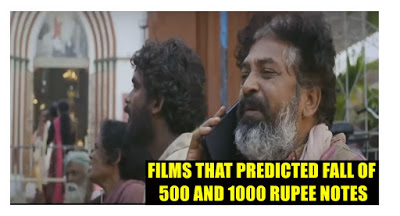 Veteran Tamil Film Makers have predicted well in advance about the demise of the 500 and 1000 Rupee notes. This included the icons of Tamil Cinema Super Star Rajinikanth and Ulaga Nayagan Kamal Hassan giving insights in their respective films. While Ulaga Nayagan made gave us just an insight about what would happen in a quite older of the tamil films, the Super Star has explicitly mentioned it in a not so old film of his. There’s been a reference in another film too. Read More to Know. The end card of the super hit movie by our very own Super Star Rajinikanth had a news paper report saying “If 500 and 1000 rupee notes aren’t exchanged within a month they’d be announced deficit and counterfeit”. The film written by Sujatha and Shankar had a story line of an American Indian fighting against corruption. The film ended with the sequence of the government putting an end to the black money menace.

However Ulaga Nayagan Kamal Hassan gave us a rather glimpse about the higher denominations going out of system. Check out this song “Pachaikiligal tholodu” from “Indian” (also directed by Shankar) where the Ulaga Nayagan is found making paper boats from Rupee Notes.

“The poverty in our country is mainly because of tax evasion. All the money which are hidden from taxes are stored in the denominations of 500 and 1000. Only 20% of people in the country use 500 and 1000 rupee notes. The rest of the 80% have just one or two 1000 rupee notes and are searching for coins. If it’s a 1000 rupee note, even 100 crores can be contained in two big suitcases while in cases of 100 or 50 rupee notes, a big house will be needed! It won’t be safe. People would start getting scared of their money getting robbed, legal encounters with the police, income tax raids, gold investment wouldn’t be much an option due to price fluctuations. Real Estate investments may lead to their lands being seized once the Government changes. Depositing in the bank would be the only choice left. But if they do so they’d be left paying heavy taxes. If all the rich people in the country paid their taxes honestly, not just poverty, even there wont be any beggars left in the country.!”

Film director Vettri Maaran, in his recent interview with film critic Baradwaj Rangan, talked about his lifestyle and about how he has been consuming...