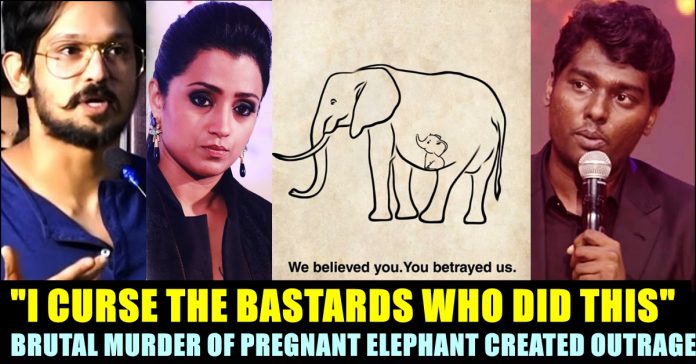 Followed by the horrific murder of a pregnant elephant in Kerala, many influential personalities including cinema celebrities across the country are expressing their anger towards the people who fed firecracker stuffed pineapple to her.

Filmmaker Atlee who is known for making films like “Theri”, “Bigil” with Vijay shared the news and said “Couldn’t come out of this. She was pregnant” in his tweet.

Couldn’t come out of this
She was pregnant https://t.co/Kiw5CAsV6z pic.twitter.com/kQl0KnAzVb

Actress Varalakshmi Sarathkumar said that she hopes Corona get those people who killed the pregnant elephant.

Like I said people are monsters not these poor animals.. goes to prove that literacy has nothing to do with being humane or empathetic or even have the slightest sense of having common sense..!! Disgusted.. I hope corona gets these monsters and they die.!! pic.twitter.com/iZgnd0UqcO

Actress Trisha shared an art work in which we can see an imaginary last conversation between the mother and child. She added her post with a caption saying “RIP humanity”

Actor Nakkhul came up with an Instagram post saying that he curse those bastards who involved in this crime. “They should have a long long pathetic life with every minute of it being extremely gruesome & painful and nobody to help. They should wish for death and not get it.” he wrote in his post.

I curse the bastards who did this . . They should have a long long pathetic life with every minute of it being extremely gruesome & painful and nobody to help. They should wish for death and not get it. Repost @tedthestoner with @get_repost ・・・ A pregnant elephant was fed cracker stuffed pineapple by unidentified people in Kerala which exploded in her mouth and damaged her jaw. She walked around the village and finally passed away standing in a river. We keep searching for monsters hoping they would be having the devil's horns on their heads. But look around you, the monsters walk beside you. From anybody who throws stones at a stray dog to anybody hurting a living soul, choose one face. A lot of these animals trust human beings because they have been helped by them in the past. This is cruel beyond measure. When you lack empathy and kindness, you do not deserve to be called a human being. To hurt someone is not human. Just stricter laws won't help. We need a decent execution of the law too. Until the guilty are punished in the worst possible way, these wicked monsters will never fear the law. Though it's a difficult task, I hope they are able to find out the one who committed this crime and punish them accordingly. Artwork by Bratuti.

“Truly heartbreaking… 💔 This is totally unacceptable. Violence towards these innocent creatures must be stopped. They deserve all the love and care in this world!” actress Simran wrote as her caption while reactiong to this news.

Truly heartbreaking… 💔 This is totally unacceptable. Violence towards these innocent creatures must be stopped. They deserve all the love and care in this world!

Actress Aathmika said that this incident has showed the irony of worshipping lord Ganesh.

The irony is we worship Ganesha and abuse elephants. RIP Humanity

Actresses tamanna and Bigg Boss star Sherin also shared the news and expressed their anger. Locals in Kerala allegedly fed a pineapple stuffed with fire crackers to a pregnant elephant on Wednesday. The elephant died after the pineapple exploded in its mouth. The elephant’s autopsy report came out only yesterday. The wild elephant had left the forest of Silent Valley, meandering into a nearby village in search of food.

Forest officials came to know about the elephant only on 25th of May, days before her demise. She died on 27th of May while standing it water despite of several efforts took by officials to rescue her. This incident created huge outrage in social media where people are fuming against the locals who fed that pineapple to her.