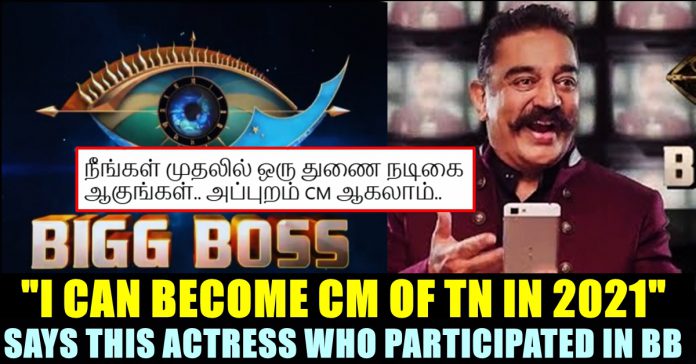 Bigg Boss show is a way to enter cinema industry, most of them believe. Many stars made it to the Big screen as well. Raiza Wilson, Harish Kalyan, Aarav are few of the example and many renowned celebrities made their come back to the film industry after their Bigg Boss stint as well. We are very well aware that the host of the show and veteran actor Kamal Haasan is a CM aspirant. Now, to our shock, a contestant of the latest season has expressed her wish to become Chief Minister.

The 100 days reality game show which is being telecasted in Vijay TV sees 14 or more contestants every season. Meera Mithun, one of a controversial contestant who is known for making baseless accusations against her co-contestants, has not came up with a tweet says that she can make a corruption free Tamilnadu.

Meera Mithun who is grabbing the headlines for all the wrong reasons, has now shocked her followers with a recent announcement. After the end of Bigg Boss season-3, Meera Mithun, one of a female contestant is very much busy in social media platforms, especially in Twitter. Being one of the most controversial contestant of the Bigg Boss show, Meera Mithun accused almost every housemate who participated along with her in the reality game show. To an extent, she even accused Kamal Haasan by saying that he used his influence to cast his daughter Akshara Haasan in a role which was supposed to do by her in the movie “Agni Siragugal”.

I am always against corruption. I can make corrupt free TN . Damn Sure that I can become CM in 2021 @IndiaToday @pinkvilla Stay safe ✨ Save lives 💫 https://t.co/r9jGVo8j7e

Check out some of the reactions for her post below :

Months back, Meera Mithun had uploaded a post announcing that she became a Director for Chennai Tamilnadu State in Anti-corruption commission ( A.C.C ). However, she got terminated from that post by the officials. One of the main two reasons stated is Meera Mithun didn’t provide Police clearance certificate to the commission in order to get the posting. Another reason is many people from public questioned the commission on the FIR against her. (Read : Meera Mithun Removed From Her Central Government Position !!)

Meera Mitun who appeared in films like Thaana Searntha Kootam and 8 Thottakkal is expected to appear in more films.

Previous articleMadhuvanti Came Up With A Clarification For Her Blunder !! WATCH
Next articleMany People Started Getting Calling Lawrence For Help !! Here’s How He Reacted

After making history with his Javelin throw ability on Saturday, 23 year old Neeraj Chopra has been grabbing headlines for various other reasons. After...