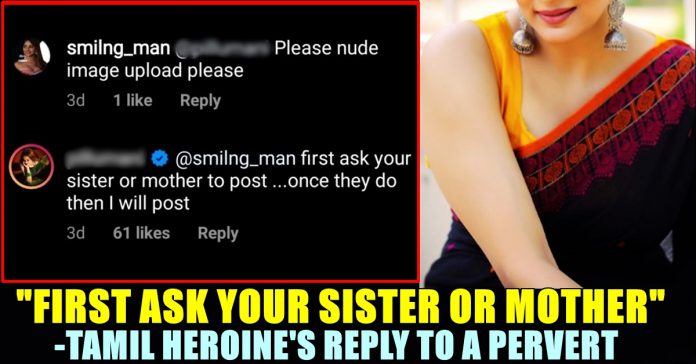 After politely turning down a couple of marriage proposals, actress Priyamani gave back to a miscreant who asked her to upload a nude picture of herself. She made him shut down once and for all which also grabbed the attention of the netizens as the screen shot is being carried by a number of news portals.

Priyamani made her acting debut through Evare Atagaadu, a telugu film released on 2003. She gained widespread recognition for her role as village girl Muththazhagi in the Tamil romantic drama Paruthiveeran in 2007, directed by Ameer. She received a National Film Award for Best Actress and a Filmfare Award for Best Actress in Tamil for her performance in the film which also marked actor Karthi’s debut.

Her notable works include Raam, Raavan, Raavanan, Chaarulatha and Idolle Ramayana. After acting in a film named Chaaru latha in Tamil, Priyamani started concentrating on Malayalam and Kannada films. She is also pretty much active in social media platforms and is engaging her followers by uploading pictures from her photoshoots.

She is currently enjoying 1 million followers in Instagram and has uploaded 828 posts. Check out some of her recent posts below :

The 36 year old actress is pretty much interactive with her online followers as well. Taking advantage of it, one of an Instagram user whose handle name read as “smiling man” demanded the actress to uploaded a nude picture of herself.

In a way of shutting him down, Priyamani said “first ask your sister or mother tp post.. once they do then i will post”

Another follower asked “will you be mine forever” and the actress replied to him saying “Sorry !! you need to ask my husband that.. if he gives permission.. then I can think about it”

She made similar reply to another follower who made a marriage proposal. Without losing her nerves or blocking the user, Priyamani replied to him saying that she has no problem in marrying him but wanted him to get permission from her husband. “I don’t mind but ask permission from my husband first…if he says yes then I’ll gladly marry you” her reply read.

On 23 of August 2017, Priyamani married Mustafa Raj, an event organiser, in a private ceremony. The actress also uploaded a number of pictures of themselves in her official Instagram account.

Previous article“Stalin Held Youth Leader Post Till 70 Only To Give It To His Son” – TN CM EPS
Next article“Please Don’t Spread Fake News” Nivetha Pethuraj On Kissing Her Co-Star !!

Rashmika Mandanna is one of the very few actress who got fame and place in the hearts of many fans in a very short...