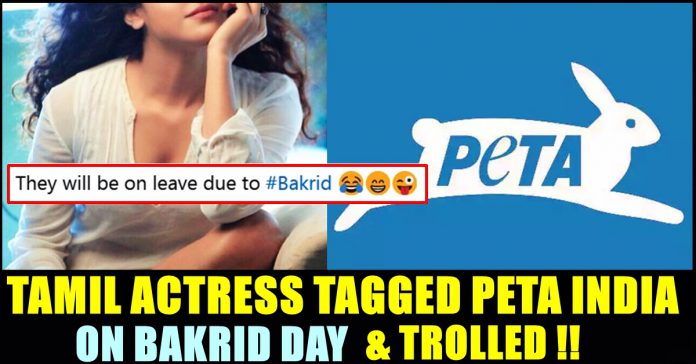 Bakrid or Eid-Al-Adha, one of the most important festivals celebrated by Muslims all over the world, falls on the 21st of July this year. To celebrate the most auspicious festival of Islam, people and believers of the community would wish each other, conduct communal Eid prayers and cook celebratory meals. In the second most important festival of Muslims, believers would sacrifice goat, sheep, camel, buffalo in whatever number an individual can afford. Meanwhile, actress Pia who is known among Tamil film audience for acting in films such as “Ko”, “Goa” uploaded a tweet tagging Peta India and trolled the organisation.

People for the Ethical Treatment of Animals organisation which is also called as PETA, is known for acting against animal violence. “Animals are not ours to experiment on, eat, wear, use for entertainment, or abuse in any other way” is their slogan. Being the largest animal rights organization in the world, with more than 6.5 million members and supporters, PETA reports to one million followers in Twitter and to 1.4 million followers in Facebook. The PETA India enjoys one and half lakh followers in Twitter as well.

The organisation urges every citizen of our country to contact them if any kind of animal violence comes to their notice in order to rescue the animals. Now, on the auspicious day of Bakrid, actress Pia Bajpiee who debuted in Tamil film industry through a Tamil film named “Poi Solla Porom”, uploaded a tweet wishing “Good morning” to PETA India. She also added a kissing emoji in a sarcastic manner.

The post garnered huge reception among the users of the micro blogging social media site. Reactions trolling the organisation flooded in the comment section of the actress’s post as well. “They will be on leave due to #Bakrid” a user commented whereas another one said “Why don’t we celebrate Bakrid as #petaindia’s day every year, in remembrance of innocents lives of animals..? The effort they put during our festival times is enormous..”

Why don't we celebrate Bakrid as #petaindia's day every year, in remembrance of innocents lives of animals..? The effort they put during our festival times is enormous..

They are in hibernation for now ..will wake up when time comes

Don't disturb, they are sleeping for next 2 days

Peta is on leave. Will resume on Raksha Bandhan.

Ask them what's the mutton recipe! They will block you🤣

They will be on leave due to #Bakrid 😂😁😜 https://t.co/E1KTaMqlLU