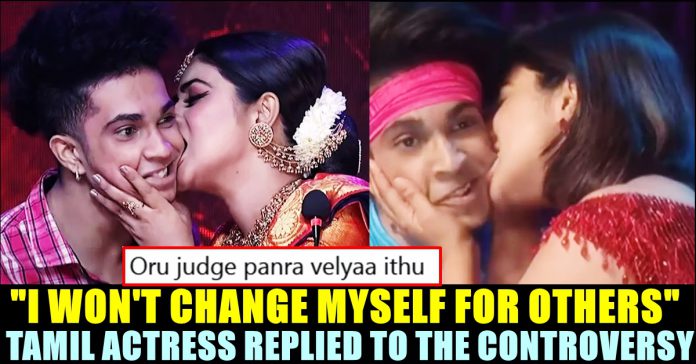 South Indian actress Poorna who is known for acting in films such as “Savarakathi”, “Kantha Kottai”, “Sakala kalaa Vallavan” recently caught in a controversy after kissing and biting the cheek of a young contestant, put a full stop to all the criticisms by asking how it would be wrong as she is treating the young contestants as her children. The actress said that she has been participating in the show as a judge for past three years and has been kissing the participants often.

It all started when the actress kissed a male contestant to applaud his dancing performance. After kissing, she also bit the cheek of the same contestant. Ever since the episode got streamed on Television, criticisms started surfacing against the actress, trolling her saying that she behaved inappropriately. “Is this how a judge would behave ?” a twitter user asked by uploading the video of the actress kissing and biting the cheek of the young contestant.

“I don’t know whether it is right or wrong but I would encourage children in this way. I see the boy whom I kissed in the show as my own kid. I like his dancing skill very much. I said to himself that I would like to raise my child in the way he has been raised as a dancer. I have been participating in that dance show as a judge for past three years. Me kissing to the participants of the show is not something new” the actress further said.

“Kid who dance well would ask me to kiss and bite their cheeks. No one in that show, accused this gesture of mine. I would never behave this way to those who are in my age. I know how to behave, treat and limit myself. I would never change this habit of myself which I do to express my love.” Poorna said to Vikatan.