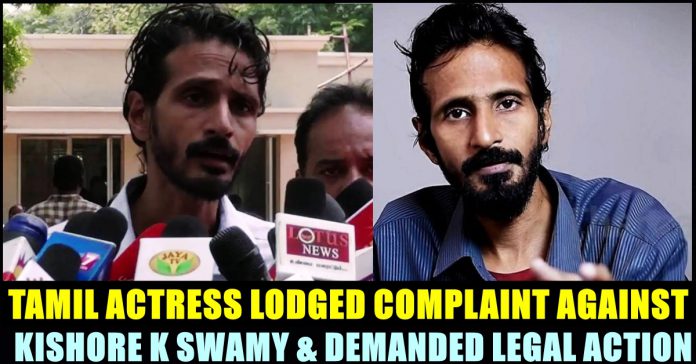 Ace Tamil actress Rohini who is known for acting in films across South India, registered a Police complaint through online against self proclaimed political analyst Kishore K Swamy who got already arrested for defaming Tamil nadu chief ministers and abusing female journalist. Rohini wanted Kishore K Swamy to get legally punished for uploading a Facebook post in 2014. In the post, he made derogatory statements against late actor Raghuvaran, said Rohini who is a wife of the latter.

Chennai Police arrested the controversial tweeter Kishore K Swamy who identifies himself as a “Political analyst” on Monday. The arrest has been made after he made defamatory comments against Tamil nadu chief minister MK Stalin, former Chief ministers Annadurai and M Karunanithi. Complaints have been made against him for abusing female journalists as well. It is notable that he got arrested twice earlier for similar reasons and got out on bail.

Based on the complaint made by the DMK IT wing coordinator, Shankar Nagar Police arrested Kishore K Swamy and cited his comments on the current Chief minister MK Stalin and former Chief ministers as the reason for his arrest. Casen under sections 153 (Wantonly giving provocation with intent to cause riot), Section (1) (b) (Causing fear of Alarm to the public), Section (1) (C) (Create or Promote enmity, hatred or ill-will between different religious, racial, language or regional groups or castes or communities) of Indian Penal Code.

It is very well known that Kishore K Swamy is a right wing supporter and as soon as the news on his arrest surfaced, party members of BJP and the supporters of it started raising voice against the arrest. Now, in her online complaint to the Chennai Police commissioner, Rohini accused Kishore K Swamy of degrading herself and her late husband Raghuvaran who is known among public as a versatile actor, through a Face book post.

Previous articleHave You Ever Seen The Original Version Of This Epic Vivek Comedy ??
Next articleTweet Of Avengers Directors About Dhanush Left Tamil Fans Go Gaga !!

Fans who voted for their favourite Bigg Boss contestant throughout the week, are eagerly waiting to know the evicted contestant for the third week...