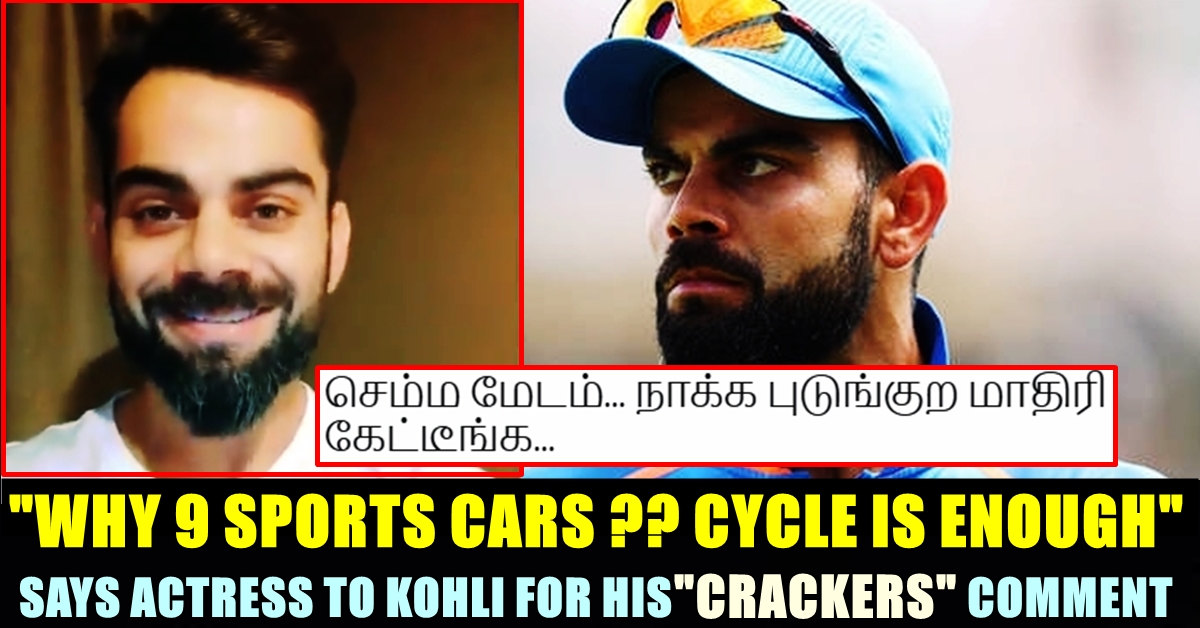 Virat Kohli has been facing severe criticism for a comment he made on Diwali day while wishing people for the special occasion. They accused Virat Kohli of being a hypocrite for asking people not to burst crackers on Diwali by uploading a video of crackers bursting on his birthday. Though RCB posted a tweet explaining that the fireworks shown in the celebration video was archival footage of UAE’s Flag Day celebrations, fans didn’t convince. Now, Kasthuri Shankar, a popular Tamil actress and former Bigg Boss contestant came up with a series of tweets questioning Kohli for the comment he made.

Kohli who is currently staying in Australia with the rest of the Indian squad, posted a video message in his official twitter account on the special Diwali day. In the video, Kohli asked his fans and followers to avoid bursting crackers on the festival of lights to protect the environment and reduce pollution.

His message didn’t go well with many of the social media users who confronted the cricketer for trying to break the ritual and for ruining people’s enjoyment. They also questioned why he is taking part in the IPL tournament where crackers are being burst during the finals and semi finals. Check out the video of the cricketer below :

Now, Kasthuri posted a tweet asking Kohli why he is owning 9 sports car and causing pollution to the environment when he can use bicycle and reduce it. “Why destination wedding with chartered flights? airport overload. Local registered marriage is enough.” she asked in her tweet.

She also wanted Virat Kohli to consider the livelihoods of thousands of honest workers in Sivakasi, Tamil nadu, home of India’s firework industry. “Youth Icons like #ViratKohli should consider carefully before spouting ‘woke’ inanities that affect the livelihoods of thousands of honest working folks in Sivakasi, TamilNadu, home of India’s firework industry. Diwali means food for them. Not lucrative festival endorsements.” her tweet read.

Youth Icons like #ViratKohli should consider carefully before spouting 'woke' inanities that affect the livelihoods of thousands of honest working folks in Sivakasi, TamilNadu, home of India's firework industry. Diwali means food for them. Not lucrative festival endorsements .

Check out some of the reactions for her opinion :

If yearly once bursting crackers shld be banned 4 pollution sake then what our industries doing throughout the year?

Are they going 2 stop industrialization?

They hv 2 think abt workers & their livelihoods in this industry.