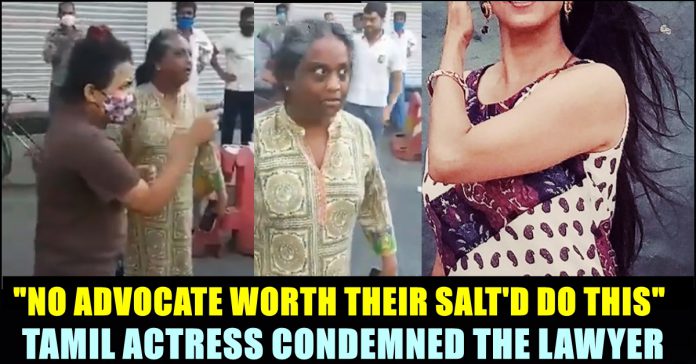 Condemnations emerged from all over the Internet as soon as the video of an elderly woman who claimed herself as a lawyer hurled abuses at the Chennai traffic police for stopping her daughter’s car on Sunday morning as a part of the lockdown inspection. Now, Tamil actress Kasthuri who is known for sharing screen space with actors such as Kamal haasan, Sathyaraj and many high profile Tamil actors, came up with tweet slamming her. She who identifies herself as a lawyer, said that no advocate would behave that way and said that she respects Chennai Traffic Police for maintaining their standards even under provocation.

Cases under relevant sections has been filed against the woman for violating lockdown protocols and for abusing cops. A video of herself shouting at the cops went viral in social media platforms on Sunday. She reportedly rushed to the scene after Police stopped her daughter’s car in Chetpet. The complaint was made by Rajith kumar, head constable at Chetpet traffic police station.

Rajith kumar, along with his colleagues Prabhakaran, Anand, Vimalraj was on duty at the Chetpet signal on Sunday from 6 am to 2 pm. The incident took place around 7.45 am. When the traffic police team stopped a car to inquire about the whereabouts as a part of the lockdown protocols,the drive who identified herself as Preethi Rajan from Kilpauk, reportedly told them that she is going to the beach to buy fish.

When the Police asked for an e-registration pass, she reportedly denied having it. After advising her not to venture out amidst the lockdown, the police official reportedly took her driving license and booked a case before handing over the e-challan to her. The woman called someone immediately and within minutes, another woman named Tanuja Kanthulla arrived at the spot in a high end car.

She reportedly started abusing the cops and threw away the e-challan in front of the Police. In the video which is doing rounds, Tanuja could be heard threatening Police to strip their uniform and also asks them to behave. Police said that she was not wearing a mask and behaved furious when she was asked to wear one. The daughter also subjected to face legal case later.

Here’s the video that is doing rounds in social media platforms :

On seeing the video, actress Kasthuri said that no advocate worth their salt would behave like this. She also said that she got shocked as a woman and as a Lawyer. Kasthuri also said that the Police officials gained her respect by maintaining their standards even under provocation.

“No advocate worth their salt would behave like this. As a woman and a lawyer, I am shocked. This person is NOT the norm. Please do not malign us all . RESPECT to Chennai Traffic Police warriors for maintaining their standards even under provocation.” Kasthuri’s tweet read.

No advocate worth their salt would behave like this. As a woman and a lawyer, I am shocked. This person is NOT the norm. Please do not malign us all .
RESPECT to @ChennaiTraffic warriors for maintaining their standards even under provocation. @chennaipolice_ https://t.co/o8lQlC2tgA

Sections 270 (malignant act likely to spread infection of disease dangerous to life), 188 (disobedience to order duly promulgated by public servant, 294 B (utters obscene words in public), 353 (assault of criminal force to deter public servant from discharge of his duty) and 506 (1) (Criminal intimidation) of Indian Penal Code were filed against Tanuja Kanthulla.

Thalapathy Vijay’s Strategy To Eat Non-Veg 7 Days In A Week !! MUST WATCH

Thalapathy Vijay enjoys a huge fan base across the globe and is known as one of the influential personality from the cinema industry. The...