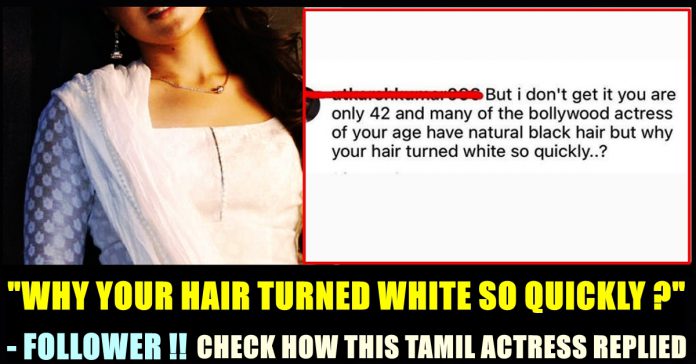 Tamil Actress Answers To A Fan Who Asked Why She Has “White” Hair !!

Actress Sameera Reddy who has been inspiring women through her Instagram posts, recently answered to one of her followers who asked why she has “grey” hair when Bollywood actresses of the same age having “natural black hair”. The actress replied saying that many women cover up and many don’t before adding that there should be “no” judgement but only acceptance. Sameera also reacted to some of the comments that surfaced on her post, regarding the same topic.

In a world which is filled with negativity, actress Sameera Reddy runs an Instagram account only to spread positivity. She never lets her followers, especially women who just gave birth to their children to feel low. The actress who conducted a gutsy photo shoot during her pregnancy period and broke the norms of a pregnant woman, has been normalizing body imperfections.

Sameera Reddy is a former Indian actress who primarily starred in Hindi and Tamil films. She is very much known among Tamil film audience for her appearance in the movie Vaaranam Aayiram. She became an overnight sensation in K-Town back in 2008. After foraying into Tamil cinema with Gautham Vasudev Menon’s directorial which turned out to be a super hit film, Sameera Reddy quickly signed many other projects in Kollywood, like Vedi, Vettai, Asal etc.

Most recently, she shared one of the messages she received from a follower. Through the message, the follower asked why Sameera who is only 42 years of age, has grey hair, when many of the Bollywood actresses of the same age has “natural black hair”. “But I don’t get it you are only 42 and many of the Bollywood actresses of your age have natural black hair but why your hair turned white so quickly” read the message sent to Sameera.

“I choose to openly speak so that this perception changes. Yes many women cover it up . Many don’t . No judgement . Only acceptance : it’s time for healthy conversations 🙌🏻 #barewithsam #imperfectlyperfect #monday #comment4comment” Sameera added in her caption while sharing the message.

“I am 29 and my hair went 50% grey after both my babies! I don’t think age and greys have a connection.” a follower dropped comment and Sameera endorsed the tweet by replying with a high-five emoji. Check out some of the reactions her post received :

Fans Humiliated This Pace Bowler For Expressing His Wish On Playing For India Again !! Check His Reply

A Twitter user humiliated Indian pace bowler Jayadev Unadkat by asking him at what speed he will bowl after he expressed his wish about...

“She Even Accused Her Professor During Her College Days”- Joe Michael’s Shocking Statements !!

Another contestant from Bigg Boss Tamil 3 got evicted on Sunday. The show is hosted by actor Kamal Haasan. The housemates who were nominated...