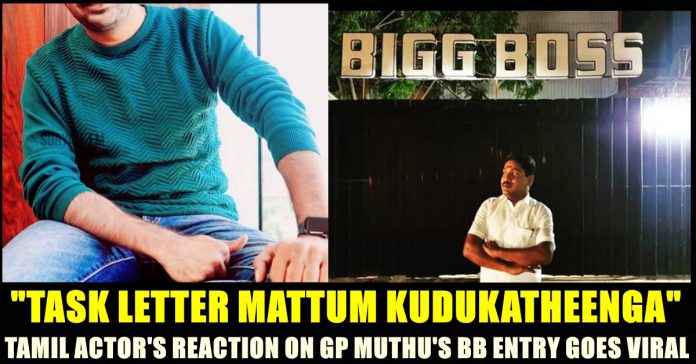 Tamil comedy actor Sathish who is known as a huge fan of Bigg Boss show, reacted to the news on G.P Muthu’s Bigg Boss participation. The actor asked the Bigg Boss management not to give task letter to G.P Muthu and said that he would read it in his own style. The tweet garnered huge reach among the users of Twitter with actress Gayathri of “Super Deluxe” fame laughing to it.

Social media users can’t keep calm after a post from GP Muthu’s Instagram account surfaced suggesting that he is going to enter the Bigg Boss house as a participant for the 5th season of the Kamal Haasan hosting show. Logo of the upcoming season released recently with the “Vikram” actor himself presenting it to the fans through a 30 seconds video. Speculations regarding the participants are doing rounds and the recent update about G.P Muthu’s participation has created waves.

G.P Muthu lives in a village named Udangudi which is located in Thoothukudi district. Repairing old windows, doors which were made of wood is his occupation. He is also running a lumber shop in his village, says reports. He who has four children, started uploading videos in Tik Tok during his work time to engage himself. With Tik Tok being a widely used mobile application at that time, videos of G.P Muthu went viral among the users of it.

He imitated Tamil film songs and his videos started receiving views in millions. G.P Muthu who started doing videos for entertainment, started spending his full time in Tik Tok. He became a subject to severe online trolls and didn’t stop doing videos in Tik Tok. After the TIK Tok app got banned, GP Muthu initiated a youtube channel and is actively doing videos for it.

Currently, the youtube channel of GP Muthu in nearing 1 million subscribers with half million views for every video. His humorous reactions and rural slang has a separate fan base. Now, a post that got surfaced in his official Instagram handle has created shock waves in social media platforms. The post shows the former posing with a banner of “BIGG BOSS” wordings. Check out the post below :

Among the thousands of reactions, Actor Sathish came up with a tweet writing “Ulla task letter a mattum padikka vitraadhingappa…. Ennada task kudukkuringa… Setha payaluvala… Naara payaluvala….” in his tweet. Here’s his tweet :

The tweet received 9k plus favourites in no time. Many trolled Sathish himself, asking him to do similar comedies in his movies. Check out some of the reactions below :

Previous article#JusticeForCameron Is Trending After The Tiktoker Got Imprisoned!!
Next articleJUST IN: Ranjith Opened For The First Time About His Film With Vijay!!

Following PMK, Now DMK Trending On Internet For A Wrong Reason !! Check Out !!

A day after their rivals announced an alliance, the Congress is likely to formalise their partnership for the upcoming Lok Sabha elections with MK...

Few of the contestants of upcoming BIGG BOSS 4 show has been revealed and reports have said that they are currently home quarantined to...