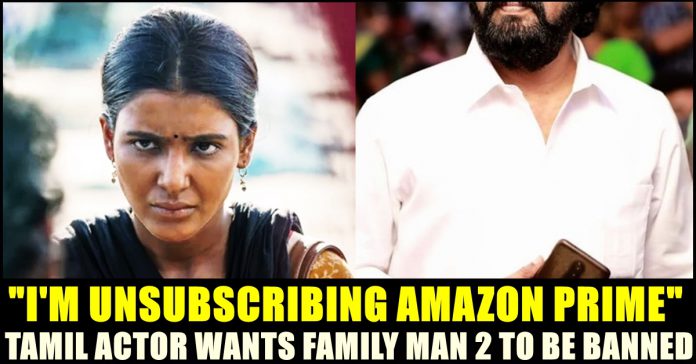 Followed by the condemnations from various individuals, national award winning director and actor Cheran, uploaded a series of tweets demanding a ban on the newly released Bollywood web series The Family man season 2. Chena believed that the series has portrayed LTTE which fought for the people of Tamil community in a bad light and said that he is going to abandon it. The filmmaker wanted the makers to immediately stop streaming and series and announced that he is not going to be a subscriber of Amazon Prime until they stop streaming it. He also retweeted the press release of director cum politician Seeman against the series.

It all started when the trailer of the series released in youtube. Throughout the trailer of the “Family man 2”, we could see Samantha wearing the uniform of the Liberation Tigers of Tamil Eelam (LTTE). The dialogues also suggested that there is a hostage situation in Chennai. It has been reported that most part of the website is taking place in Chennai. LTTE also known as Tamil tigers is an organisation that attempted to establish an independent state for Tamils named “Eelam” in Sri lanka.

Sharing a post of Amazon Prime about the series, influential Tamil director Cheran said “I am abandoning this web series which is made to degrade an organisation which fought for the people of Tamil community. I want this to be stopped immediately and I am not going to be a subscriber of Amazon Prime until they stop streaming it” in his tweet.

Here’s the reply he made to the press release of Seeman :

On Friday, actress Samantha who played one of the leads in the film, uploaded a post in her official Instagram account stating why she chose to ply the role in the series. Day after the release of Family Man 2 web series, actress Samantha who got criticized by a number of social media users for taking up a role that allegedly portrayed a girl who belong to Tamil Eelam as an extremist, came up with an official press statement. Samantha says that she was aware of the sensitivity and balance that was required to do the role Raji. She who was reading the reviews since the release, said that the character “Raji” will always be special to her and said that the role to pay tribute to those who died due to the unequal war.

Selvaraghavan was born in a Tamil family to film director Kasthuri Raja and Vijayalakshmi. He has a brother, Dhanush, who is an actor, and...

Unlike others, Supertar Rajinikanth who requires to be mindful while delivering his stage speeches due to his stature, is not really preparing and it...