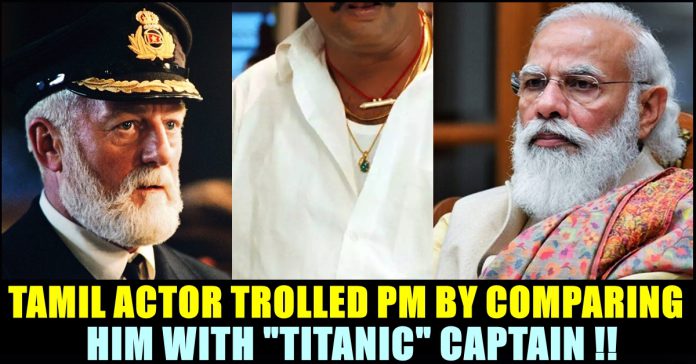 Pan Indian actor Prakash Raj who is predominantly known for acting in Tamil films, came up with a twitter post trolling Prime minister Narendra Modi by comparing him with a famous character in the globally acclaimed 1998 film “Titanic”. In his tweet, Prakash Raj said that his post is about the film “Titanic” and firmly said that Modi supporters won’t agree. Replying to his tweet, Director John Mahendran, son of legendary filmmaker Mahendran replied to the tweet of Prakash, saying “And the white bearded man doesn’t look like Modi…” to troll Modi.

In the last 24 hours, India has recorded 2,76,110 positive cases in the state. The total tally of the viral infection now stands at 25,772,440. Thursday’s numbers show India continues to maintain a downward trend in daily Covid-19 cases after the number of cases hovered above 3,00,000 in the deadly second wave of the infection. The country also recorded 3,874 deaths, pushing the overall toll to 2,87,122. On Wednesday, India had recorded its highest single-day death toll with 4,529 fatalities.

Meanwhile, cases of a new virus named black fungus virus is increasing in the several states of the country. It is also reported that the cases of white fungus infection that is widely spreading is considered to be more dangerous. Lack of medical facilities in the country has been a major struggle for the people as many could be seen trying to get oxygen cylinder, hospital bed with ventilator and other medical requirements through social media platforms.

“The ship was leaking and people were dying but the white bearded captain lied (This post is about “Titanic” movie” the picture said with the Prakash Raj’s caption “Dear SUPREME leader…This is about TITANIC… but the BHAKTS won’t agree .. #justasking”

Dear SUPREME leader…This is about TITANIC… but the BHAKTS won’t agree .. #justasking pic.twitter.com/FYkHmG5Uxg

“Sachien” director John Mahendran trolled the Prime minister of our country through his comment as well.

And the white bearded man doesn't look like Modi…

Pls don’t compare, he stayed in the ship n died for his mistake

We are witnessing a bigger titanic with 130 crore passengers.

A written FIR has been lodged against Salman Khan at DN Nagar Police Station, Mumbai on Wednesday evening. Bollywood actor Salman Khan landed in yet...

“Is This My Fault??” These Kollywood Actors Fighting To Get Their Voting Rights !! WATCH VIDEO !!

Almost six crore voters will be exercising their franchise in Tamil Nadu when the State votes for 38 Parliamentary constituencies and bypolls to 18...