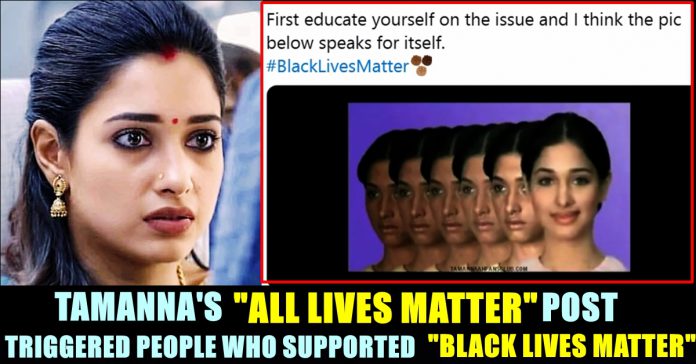 The demise of George Floyd in United states made people to raise voice against racism. Enormous number of people protested against the discrimination despite of the spread of Coronavirus. Days ago, George Floyd, a black man was died after four police officers handcuffed him and pinned him to the ground with their knees. A video of the arrest surfaced online where he can be seen pleading the officers to let him breathe. George was pinned down by the neck by a Minneapolis police officer and died. He laid there, fighting for his life, struggling to breathe, and other officers just stood there and watched.

This incident created huge outrage across the world where people started raising voicing supporting black people. An hashtag saying “Black lives matter” trended in Internet to prevent racism in future. Followed by this, another hashtag saying “All lives matter” also trended in twitter which denoted that not only blacks but all the lives which are surviving in this planet are important. This hashtag reached widely after the demise of an elephant in Kerala.

Many influential personalities including cinema celebrities and sports personalities posting tweets to create awareness on how important every species in this world are. Actress Tamanna who is known for acting in films like Sura, Veeram posted tried to create awareness in an unique way. She uploaded a picture of herself in which she can be seen painted her face with a mark of a human’s palm around her mouth and her neck was painted with complete black color.

“Your silence will not protect you. Doesn’t every life matter, human or animal? Muting any form of creation is against the universal law. We must unlearn and learn to be human again, express compassion and practice love.” caption of her post read.

Your silence will not protect you. Doesn't every life matter, human or animal? Muting any form of creation is against the universal law. We must unlearn and learn to be human again, express compassion and practice love.#AllLivesMatter #WakeUpWorld pic.twitter.com/Ixzq39ueJC

This post doesn’t go well with the followers of her as many of them accused the actress for not voicing out for other important issues such as migrant struggles in India. Few even posted screenshots of her fairness advertisement to question why she promoted racism in the past.

First educate yourself on the issue and I think the pic below speaks for itself.#BlackLivesMatter pic.twitter.com/tq2ai7OdhA

It is nice that you are talking about black lives. But why did you act in an ad that made people feel inferior and insecure about their dark color? pic.twitter.com/E8uxlwgXyB

IF ALL LIVES MATTER THEN BLACK PEOPLE, DALITS, MUSLIMS WOULDNT BE OPPRESSED SO SAY BLACK LIVES MATTER COWARD, SAY IT!!!

Did she just "Black Faced" her neck???
WTF… Is wrong with Indian celebrities?? Have they ever read a book???

👎another celebrity wokenup by an elephant death, but sleeping b4,
I checked ur TL and couldn't find a single tweet about migrants died in railway track / railway station / on the road walking.
Also Do some background check on @ishafoundation how it deforested elephant walk area

Earlier, when Priyanka Chopra posted similar tweet to show her support for black people only to get criticized for promoting face cream. Read : Priyanka Chopra Facing Severe Criticism For Her Post !!