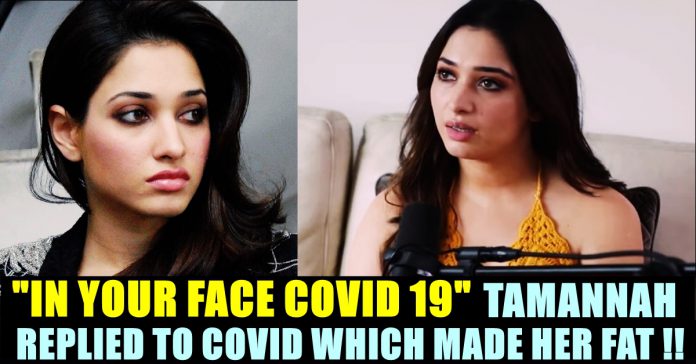 After recovering from COVID 19 virus, Tamannah became active in social media platforms and also started working for her upcoming films. During her recovery period, the actress fought the battle to recovery which included fat shaming from the online users. Now, after gaining her pre-Covid body, Tamanna came up with a post replying to the virus in her official Instagram account.

During her recovery, the actress had received some backlash over her weight and was trolled by a section of social media. Replying to the trolls, Tamannah, at that time, asked “How insensitive people could be ?” and shared about how COVID 19 gave her the fear of losing life. “I was really scared when getting treated, there was a constant fear of death in me. I had very severe symptoms that I knew had killed others on their way to recovery. But the doctors truly saved me and I should thank my parents too for standing in support. It made me realize how valuable life truly is.” she said.

While addressing about the trolls and criticisms about her body, the actress said “I was on heavy medication throughout the process which made me look heavy. There are many who called me fat when I posted a picture. It showed me how some can’t see through what the person has gone through and instead, just look for flaws.”

Now, month after the incident, the actress came up with an Instagram post of her work out video. Through her caption, Tamannah said that she gained her pre-covid body through her consistent work out.

“You don’t have to be extreme, just be consistent. 🏋️‍♀️ 2 months of consistent, supervised workout routines with @devimeena and @kirandembla, and I’m back to my pre-covid body! 💪🏼 In your face Covid-19 😎” she wrote and made fun of the virus.

Tamannaah Bhatia known simply as Tamanna, is an Indian actress who predominantly appears in Telugu and Tamil Films. She has also appeared in several Hindi films. In addition to acting, she also participates in stage shows and is a prominent celebrity endorser for brands and products. The actress who was last seen in Vishal’s “Action” has signed no film in Tmil so far and is expected to appear in Telugu and Hindi films such as “That is Mahalakshmi”, “Bole Chudiyaan”, “Gurthunda Seethakalm”, Telugu remake of “Anathathum” etc.

She is one of the actress who has a huge fan following especially in social media. The 31 year old actress is currently enjoying 1 crore plus followers in Instagram and she who is pretty much active in the social media account has posted 1460 posts so far. Comment your views on the way Tamannah replied to COVID 19 !!