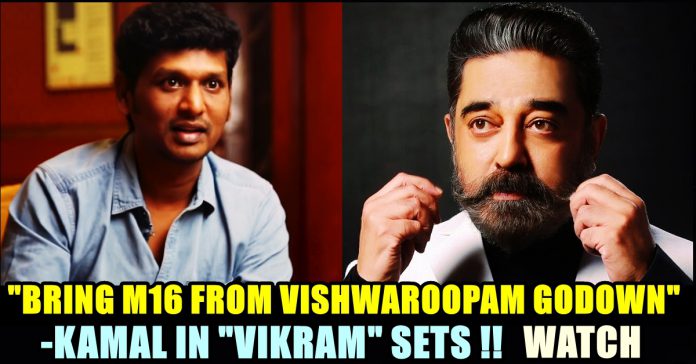 Lokesh Kanagaraj who is currently busy appearing in youtube channels to promote his upcoming film “Master”, shared about an interesting incident that took place during the making of the title teaser of “Vikram” which is next release after the Vijay starrer. The filmmaker revealed how Kamal Haasan effortlessly helped him in getting a rare gun named as M16 for the making of the title teaser.

The most awaited title teaser of “Kamal Haasan 232” released in youtube by its director Lokesh Kanagaraj and Producer/ Actor Kamal Haasan on November 7 which marked the 66th birthday of the latter. Titled as “Vikram”, the film became the first Tamil feature to have a 142 seconds long motion video teaser just for the release of the title. Lokesh who identifies himself as an ardent fan of Kamal Haasan, was lauded by his colleagues and by the fans of Tamil cinemafor the work he pulled off in the teaser by having Kamal.

Now, during an interaction with film critic Bharadwaj Rangan for his youtube channel, film companion South, Lokesh opened on how Kamal helped him in getting a weapon for the making of the title teaser. While answering to a question of Baradwaj who asked Lokesh to tell on how he felt while composing frames for Kamal Haasan, the filmmaker said that such thoughts would fade away in the sets as there will be time constrain.

“He asked me only one thing before uttering the dialogue. He called me as “Lokesh” and asked whether he should say “Aramiklama” or “Aramiklangala”. I asked him to say “Aramiklangala” as he was about to kill them all. That’s the whole conversation between us. Apart from that, the conversation will be about general things” said Lokesh and went on to explain a incident that took place in the sets of “Vikram”.

“While explaining him about what to do with the guns, he asked me whether they were imported now. Talking about it, I told him that I couldn’t get a gun named M16. He immediately asked whether I want it and asked me to wait for an hour. He called someone and asked him to get the M16 runs from the godown of Vishwaroopam. After an hour, there was 30 to 35 guns that were used during the making of Vishwaroopam. I was very much excited and picked two guns of my wish” Lokesh said.

“You talk about anything, he will have a solution and will get things ready for that” he added. The title teaser of “Vikram” showed Kamal Haasan donning a black full shirt, folding it a bit enough to expose the Kada he is wearing as he did in his 1988 film Sathyaa and black trousers with salt and pepper hairdo. The teaser opens with a large villa located amidst a forest in which Kamal Haasan is cooking a lavish South Indian entree. In the meantime, he is also making it sure that his weapons are fully loaded and ready to take down at least a small army.

In what is being speculated as one of the most explosive sexual assault cases in Independent India, new developments are emerging in the Pollachi...

Julie Announced About Her Come Back Into The BIGG BOSS Show !! Check Reactions

Julie of Bigg Boss season one fame announced about her come back into the 24 hours version of the same show and the users...