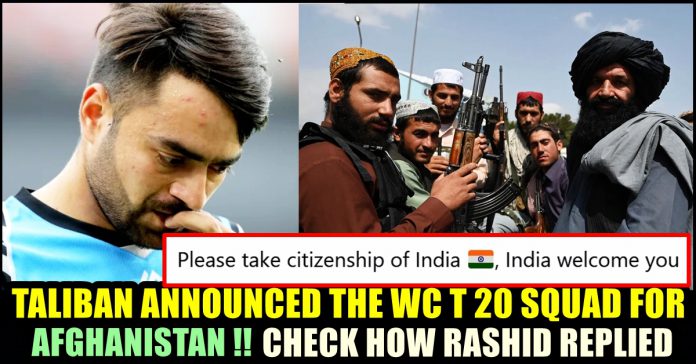 Few minutes after Taliban controlled Afghanistan announced the squad for the upcoming T 20 world cup, star player of the team Rashid Khan expressed his objection by stepping down from the captaincy. The young cricketer alleged that he was not consulted while selecting the team for one of the biggest tournaments of International Cricket Council and said that he is not interested in captaining the team anymore.

It is notable that Rashid Khan appealed the international community for help to aid his country amidst the Taliban takeover. “Kabul is bleeding again. STOP KILLING AFGHAN PLEASE. Dear World Leaders! My country is in chaos,thous and of innocent people, including children & women, get martyred everyday, houses & properties being destructed. Thousand families displaced.. Don’t leave us in chaos. Stop killing Afghans & destroying Afghanistan. We want peace” Rashid said through his tweet during early August.

Minutes after the announcement was made, Star cricketer Rashid Khan who acts as a prominent spinner of Sunrisers Hyderabad in IPL tournament, came up with an announcement saying that he is stepping down from captaincy as he was not consulted. “As the captain and responsible person for the nation I deserve the right to be part of the selection of the team. The selection committee and ACB has not obtained my consent for the team which has be announced by ACB media” Rashid Khan said.

“I am taking the decision of stepping down from the role as the captain of Afghanistan T20 side effective immediately. It’s always proud playing for Afghanistan” Rashid added. The post garnered wide reach as soon as it got surfaced in the timeline of Rashid and grabbed headlines as well. Check out some of the reactions below :

💔💔💔
The team that has grown amazingly since last decade is going through such hard time! Played Asia cup final against India defeating teams like SL PAK BAN and played a Draw against Ind. Won their first test against Ban. Qualified for WT20. It's hard to see as a cricket fan.

This is just plain sad. So many inspiration is going to go into dust… https://t.co/cLZmREWdkR