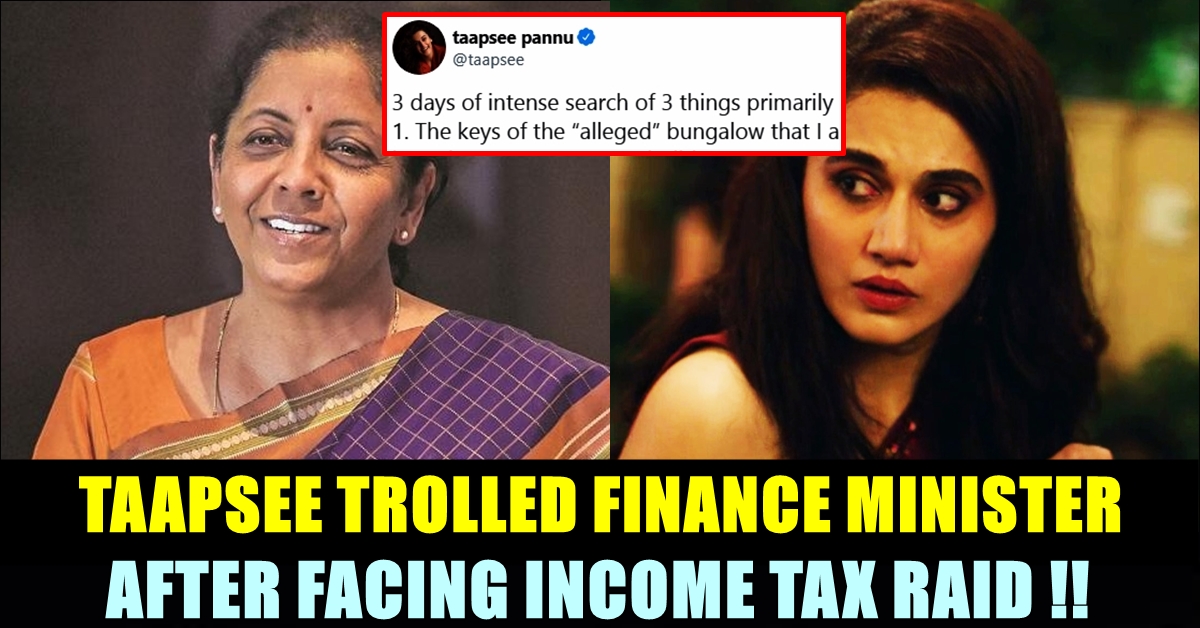 After facing Income tax Raids, actress Tapsee Pannu came up with a series of tweets trolling the government for the three days of an intense search that took place at her property. On March 3, the Income tax department began raids on the homes and offices of actress Taapsee Pannu and Director Anurag Kashyap. Both were questioned by income tax officials in Pune. It is notable that the duo is known for raising voice against the BJP government through their respective social media platforms.

It was reported that searches took place at 30 locations in Mumbai and Pune, including premises linked to a talent agency as well as Phantom films, which was co-promoted by Anurag Kashyap, producers Vikas Bahl and Madhu Mantena.

“The Income Tax department probes someone based on whatever information they get. The issue goes to court later,” Information and Broadcasting Minister Prakash Javadekar said during a BJP briefing. Exceed Entertainment and its promoters are also being searched. Exceed has been managing Saif Ali Khan for several years. Some executives of Kwan Talent Management, which manages actor Deepika Padukone, are being questioned.

Both Anurag Kashyap and Taapsee have criticized the current government in several occasions. They recently raised voice supporting the farmers regarding the protest they conducted. Taapsee, responding to a tweet uploaded by universal Pop star Rihanna, uploaded a tweet saying that “one” tweet rattling one’s belief.

Now, the actress came up with a series of tweets mocking the entire process of IT raid. “3 days of intense search of 3 things primarily 1. The keys of the “alleged” bungalow that I apparently own in Paris. Because summer holidays are around the corner. The “alleged” receipt worth 5 crores to frame n keep for future pitching coz I’ve been refused that money before. 3.My memory of 2013 raid that happened with me according to our honourable finance minister P.S- “not so sasti” anymore Woman tipping hand” read the tweets she posted.

3 days of intense search of 3 things primarily
1. The keys of the “alleged” bungalow that I apparently own in Paris. Because summer holidays are around the corner

3. My memory of 2013 raid that happened with me according to our honourable finance minister 🙏🏼

It is notable that finance minister Nirmala Sitharaman commented on the matter and said that the same people were raided back in 2013 as well and no issues were made back then as it’s happening now.

Check out some of the reactions for Taapsee’s tweets below :

They are really really scared of anyone showing a spine and standing upto them, they would bully the person to any level to break them down!

Just the price you have to pay for social activism these days! More power to you taapsee, stay strong! You got this, and we’ve got you! ❤️