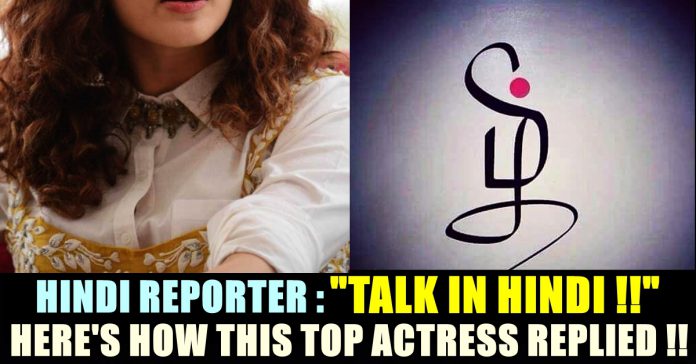 Taapsee Pannu is known for her instant replies to the trollers to shut them down in social media platforms. The actress never shied away to give her opinion on certain issues and she responded to the criticisms as well. Those who follows Taapsee in twitter know that she is not the one who keeps mum if anyone crosses her way for no reason. Now the “Aadukalam” actress has proved that she is not one among those keyboard warriors who only gives bold statements in online.

Taapsee attended the 50th International Film Festival of India (IFFI) 2019 in Goa wherein she spoke at length on a session called — ‘Women in Lead’. When the actress was giving a brief on her film experiences as lead, one of a reporter who was present at the place interrupted the actress and asked her to talk in Hindi.

Taapsee who was puzzled on hearing the demand of the reporter asked “Does everyone here understands Hindi??” only to receive big “boo” from the audience. The reporter who didn’t think of giving up further asked Taapsee “Why English?? You are Hindi actress !!”. But he didn’t expect what’s coming next from the actress.

She gave him an epic response by asking him back whether should she talk in Tamil and Telugu as she is an actress who belongs to South India also. Sir, I am a South Indian actress also, Should I speak in tamil, Telugu??” she asked him only receive a massive applaud from the crowd in the hall. Further the actress added that she wants her speech to reach the maximum people which is why she communicates in English.

This response from Taapsee received huge appreciation in Twitter especially among the Tamil twitter users. Check out some of their reactions here :

Deserved a mic drop at the end🎤 https://t.co/odoFcjyrTt

It s takes everything to stand for what’s right. Proud of Tapsee

I SCREAMED at the part.
And the man day down! I would’ve been like this pic.twitter.com/LVQFxZ43jc

Taapsee Pannu, one of the prominent actress who is known for films like national award winning Aadukalam and Ajith starer Aarambam among Tamil audience. She was last seen in Tamil in a thriller called as “Game Over” and is expected to work in more films.

Exactly a month after the audio launch event, Ashwin kumar came up with a tweet in his official twitter handle, cherishing the support he...