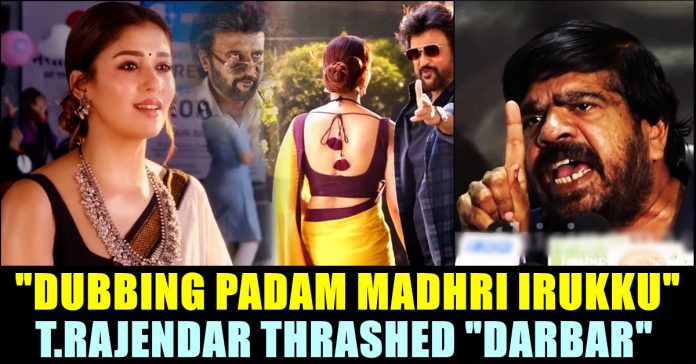 T.Rajendar, the leader of Tamilnadu film distribution organisation, has gathered a press meet to address the loss issue of the latest film “Darbar”. The film which released for the pongal festival had Superstar Rajinikanth in the lead role and was directed by A.R Murugadoss. The ensemble cast of the film includes Nayanthara, Nivetha Thomas, Yogi Babu and Sunil Shetty. The film which created huge expectations before its release faced mixed reviews from fans after getting released in theatres across the world. Now latest reports emerged saying that distributors from various places of Tamilnadu trying to meet the lead hero of it to request compensation for the loss it occured.

The film which revolves around the protagonist Adhithya Arunachalam ( Rajinikanth), had the every element of a Superstar movie. However, due to weak screenplay and usual plot, the film didn’t have a long run in the box office, according to reports. The movie was made of a budget of Rs.200 crores, according to reports. Recent reports also emerged saying that director A.R Murugadoss approached Madras High court seeking police protection for him by alleging that few distributors threatening him at his residence and at his office.

Now T.Rajander, in his press meet has clarified why distributors approached A.R Murugadoss for the loss of “Darbar”. He said that producer of the film Lyca productions suggested the distributors to approach director A.R Murugadoss. “The film was released on a wrong date. It was released 6 days prior to Pongal holiday and became old during the festival day. The entire movie takes place in Mumbai, being a Tamil film. Majority of the artists are communicating in Hindi and it feels like a dubbing film while watching it” said Murugadoss in the press meet.

Distributor Mannan further said that distributors went to Murugadoss house only to submit petition to compensate money. “We didn’t threaten him or involved in any wrongful act. His boys only involved in quarrel” he said. “We just went to submit the petition the director who bought Rs. 35 crores as salary” he added and demanded A.R Murugadoss to vopus the case he filed against distributors.

In his statement to media, Distributor Kaliappan said that he approached Lyca Productions as well. “We approached Lyca productions. They said they too have faced a huge loss and said that they couldn’t help us. Since the movie got failed to perform in the box office, we are suffering” Kaliappan said who added that they have faced a loss of 30% of total money they have invested in Darbar.

Team India won the Asia Cup after defeating Bangladesh in the finals in a nail-biting contest. There is no denying the fact that everyone...