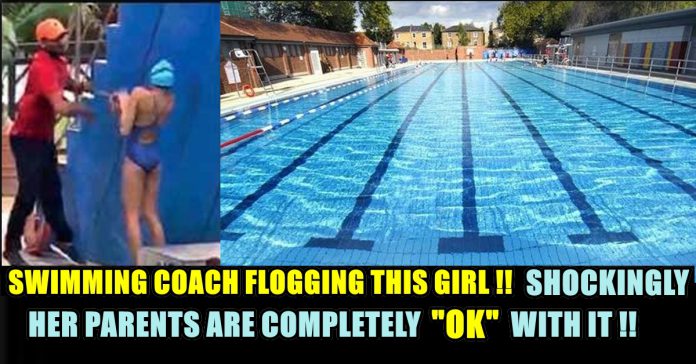 Video of a swimming coach purportedly flogging his teenage girl student with a belt-like object at the city-based Rajpath Club has gone viral on social media, prompting the authorities to suspend him.

The president of the club, Jagdish Patel, said he has ordered an inquiry into the incident, and added that the girl’s parents told him that they had no complaints against the coach as they had given him a “free hand”. In the video, the coach can be seen flogging the swimming costume-clad girl outside the swimming pool of the club located on S G Highway.

The video was apparently shot by another member of the club from the balcony of a room inside the club Thursday. Talking to reporters here Friday, parents of some of the children who are learning to swim at Rajpath Club said, “We do not have any problem with the conduct of the coach. He was doing his work. He did not hit anyone.”

Jagdish Patel said he has already suspended the coach and ordered an inquiry.

He said all the members, including the parents of the girl concerned, favoured the coach.

“When the incident took place yesterday, that girl’s mother was also present there. When I talked to her and her husband over the issue today, they said they had no complaints,” Mr Patel told reporters.

“They even said that they have given a free hand to the coach so that their daughter can fetch a gold medal,” he added.