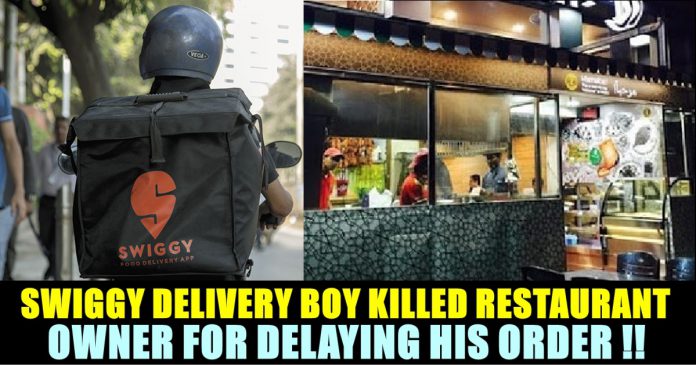 The news of the Swiggy delivery man shooting the restaurant owner on the Tuesday night of 31st August 2021 at Greater Noida near Delhi in Upper Pradesh is spreading like wildfire on various social media platforms.

On the 1st of September 2021 three suspected have been arrested in connection to the crime. They are identified as Sunil, the Swiggy delivery boy and two others, Vikas Chaudhary and Devendra.

The victim was identified as Sunil Agarwal who had a restaurant in the name ‘Zam Zam’ in an apartment complex in Greater Noida and he did his restaurant business successfully. A delivery man from an online food delivery platform, Swiggy had reached the restaurant to collect his order. His order was to deliver chicken biryani and poori sabzi.

The restaurant staff had issued him the chicken biriyani order on time but he said there would be a delay in giving him the second-order, poori sabzi. The delay in issuing the food caused an argument and ended up in a fight between the delivery man and the restaurant staff. Two of the bikers joined with the Swiggy delivery boy in the argument.

The owner of the restaurant came into the spot to make everything clear. But the argument continued and one of the three accused had ended up shooting the owner, Sunil Agarwal.

After the murder three accused ran away with their bike. Sunil Agarwal was taken to Yatharth Hospital by the restaurant employees and other staff members where he was declared brought dead.

Today (01-09-2021) morning, the men were spotted in a lane near the restaurant. An encounter broke out and one of the suspects was shot in the leg. All three were arrested. Further investigation is being made by the police officials of Greater Noida.

Swiggy, the online food delivery platform issued a statement over the incident and said: “What has been reported is very concerning. We have reached out to the concerned authorities to help verify the identity of the individual involved in this heinous incident and if such person was associated with Swiggy”.

The statement added: “All delivery partners on Swiggy are on-boarded for providing delivery services after a background verification which includes checking for any court cases or criminal antecedents and are not disincentivised for any delays.”

Previous article“This Is So Stupid” Anikha Replied To A Follower Who Questioned On Her “Survivors” Participation !! WATCH
Next article“Shut Tasmac”- Tamil Actress On M K Stalin’s Vinayagar Chathurthi Restrictions!!

Several reports emerged saying that the most famous statue man of VGP Golden beach died due to COVID 19 infection. In a way of...