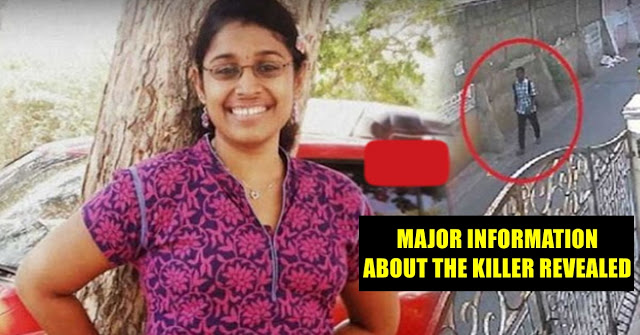 Swathi’s Friend Reveals Shocking Information About The Killer.. Police On The Verge Of Catching The Criminal

In a big development in Infosys techie murder case on Thursday, (June 30) police investigated Swathi’s colleague was staying with her. She has revealed shocking information about the killer to the cops and she also said that Swathi killer was stalking her on June 9 and 10 at Nungambakkam railway station. Swathi was brutally killed by an unidentified person in broad-day light at Nungambakkam railway station in Chennai on Friday, (June 24 ) at around 6.30 am.
Swathi’s friend also confirmed and said: ” It was stalker who had killed Swathi. The CCTV footage matched with the man who followed them on the day.” she has disclosed. Elder sister of Swathi, Nithya too confirmed about the stalker.Meanwhile, Police is conducting door-to-door inquiry in the case. However, on Monday, (June 27) the case has been transfered from Railway police to Chennai police after Madras High Court’s intervention in the case. While alleging ruling government over failure to provide security for women, the BJP and the Congress staged a protest demanding justice for Swathi as there were no clues about the accused. While giving response to opposition, Chief Minister, Jayalalithaa said in the state assembly that “though state is safe for women, fresh incident of murder is a cause for worry.” Jaya posed a question on retrospective note that how many culprits have been punished in such cases? Police Commissioner, T.K Rajendran said that “investigation is in full swing and is on the right track based on information received from family members and friends of Swathi. We have initiated a special plan for this particular murder. I urge the public to give us information regarding the killer. Eight special teams have been formed to nab the accused who is at large.” Police has also released high resolution image of the suspect in the murder case of Infosys employee.source – oneindia

A number of politicians of party BJP in Bengaluru, including deputy chief minister C.N Ashwath Nayaranan came under scanner after the allegations over a...