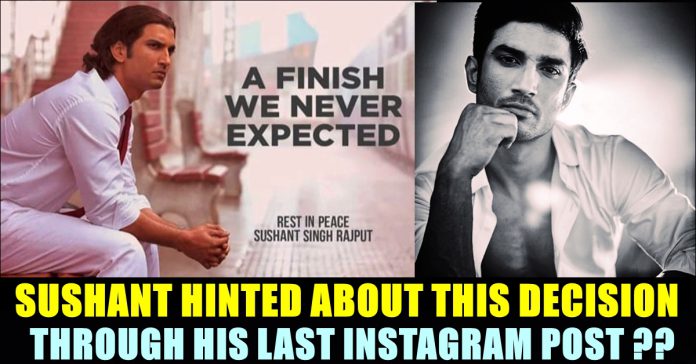 Young talent of Bollywood film industry who was expected to become a Superstar with a separate fandom, unexpectedly died on Sunday, June 14. The caused of his death is suicide according to Police and people from the Internet could not believe the news as he was just 34 years old with brighters future ahead. His role as MS Dhoni in the biographical picture of the veteran cricketer gained him the fame country wide.

He was found hanging in his Bandra home earlier this morning. Some of his friends were present at the spot when the body was discovered. The house door was broken and he was found hanging. Some of the initial reports has said that the depression is the main reason behind his death and his friends said that he was seen depressed for past six months which could be the main reason for this extreme step. A suicide note has not been found yet.

A report suggests that Sushant hosted a get together with his close friends on Saturday night. However, any of his friends hasn’t confirmed it yet. He was gone to bed really late and the house help called Sushant’s friends when there was no response from him in the morning. They found him hanging after breaking the door.

Entire country is in shell shock as the actor was very much active in his field. the last film appearance he made was in Chichchore which was released in 6th December 2019. Now, his last post in Instagram has grabbed the attention of his fans and followers in which the youngster posted an emotional message with a picture of himself with his Mother who was died in 2002.

In his post which was uploaded on 3rd of June, Sushant said that he is negotiating between past and the present. “Blurred past evaporating from teardrops Unending dreams carving an arc of smile And a fleeting life, negotiating between the two…माँ ❤️”

Blurred past evaporating from teardrops Unending dreams carving an arc of smile And a fleeting life, negotiating between the two… #माँ ❤️

Enormous number of people expressing their emotions in the comment section of this post. He was 16 years of age when his mom passed away in 2002. Naturally, her demise left a huge void in the actor’s life. He who was very much attached with his Mother penned a beautiful poem for her in the past. He was expected to be seen in a film named as Dil Bechara which is currently under post production process.

Raju Murugan is a writer, journalist turned filmmaker from Thanjavur. His works include Vatiyum Muthalum, Ondru and Gypsy, all of which were published in...

Director Shakthi Chidhambaram who is known for making comedy genre movies such as Charlie Chaplin, Englishkaaran, Covai Brothers, in his recent interaction with filmmaker...