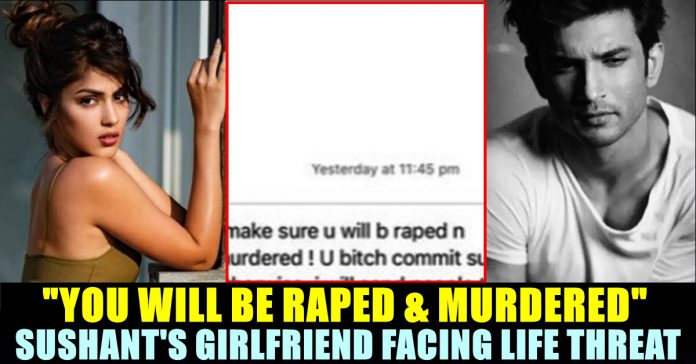 Rhea Chakraborty, who worked as TV host and became an actress through Mere dad Ki Maruti, was under scanner for past few days due to the demise of her boyfriend and actor Sushant Singh Rajput.Many blamed her for Sushant’s demise and the actress came up with an emotional post days ago to express how much she misses him. Now, today, the actress came up with a shocking screenshot exposing a curse she received from a random online user.

She who was busy answering the cops all these days regarding the demise of Sushant Singh rajput, opened for the first time about how she feels on losing her boyfriend. She came up with a long post in Instagram to express her emotions on Tuesday which marked the 30th day of his demise. Rhea confirmed her relationship with the actor in the police interrogation, revealed that they were living together throughout the lockdown before she left his apartment due to a fight which broke out between them. She reportedly informed police officers about the details of their fight and showed them they were in touch via phone and text message after it. Rhea was the last person Sushant called before going to bed.

The actress said to police that he refused to take the medicine but instead he chose Yoga and Meditation to cure the depression. Sushant didn’t take his medications despite Rhea coaxed him to do it. About leaving his apartment after a fight, Rhea said “I did not leave the house on my own. I wanted to give him space to think for himself”

In the recent screenshot she shared in her official Instagram account, a random user named as Mannu raaut who seems to be a female, threatened her. She threatened Rhea to commit suicide and said that she will send people if she fails to do so. She also says that she will make sure that Rhea will get raped and murdered.

Sharing the screenshot, Rhea says that she kept quiet when she was called a gold digger, murderer and when she was slut shamed. She tagged the user and asked how does her silence gave her the rights to threaten her. “Do you realize the seriousness of what you have said? These are crimes, and by law no one, I repeat NO ONE should be subjected to this kind of toxicity and harassment.” said Rhea and requested cyber crime to take necessary action.

I was called a gold digger ..I kept quiet I was called a murderer ….I kept quiet I was slut shamed ….I kept quiet But how does my silence give you the right to tell me that you will get me RAPED and MURDERED if I don’t commit suicide @mannu_raaut ? Do you realize the seriousness of what you have said? These are crimes, and by law no one, I repeat NO ONE should be subjected to this kind of toxicity and harassment . I request @cyber_crime_helpline @cybercrimeindia to please take necessary action . ENOUGH IS ENOUGH

In her recent post, Rhea said that she is still struggling to face the emotions. The actress said that she won’t come to terms with him not being with her anymore and confessed that Sushant was the one who made her believe in love and the power of it. She called Sushant as “The greatest physicist” and believed that the “other” world of stars, moon and the galaxies would have welcomed him with open arms. She also expressed her wish of having him back by making a wish to the shooting star, which he became now.

Comment your views on Rhea being blamed for the demise of Sushant !!

Previous articlePriest Who Raped Minor Wants Bail To Marry Her !!
Next articleRJ Vignesh Replied To Those Who Spewed Hatred At Him For His Statement On “Karuppar Kootam” !!