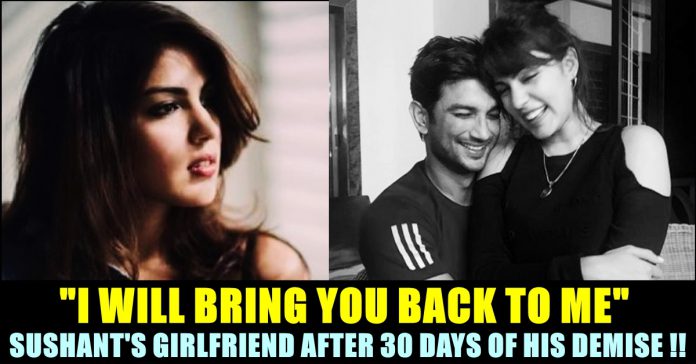 Rhea Chakraborty who was busy answering the cops all these days regarding the demise of Sushant Singh rajput, opened for the first time about how she feels on losing her boyfriend. She came up with a long post in Instagram to express her emotions on Tuesday which marks the 30th day of Sushant’s demise.

She who confirmed her relationship with the actor in the police interrogation, revealed that they were living together throughout the lockdown before she left his apartment due to a fight which broke out between them. She reportedly informed police officers about the details of their fight and showed them they were in touch via phone and text message after it. Rhea was the last person Sushant called before going to bed.

The actress said to police that he refused to take the medicine but instead he chose Yoga and Meditation to cure the depression. Sushant didn’t take his medications despite Rhea coaxed him to do it. About leaving his apartment after a fight, Rhea said “I did not leave the house on my own. I wanted to give him space to think for himself”

Now, in this recent post of her, Rhea said that she is still struggling to face the emotions. The actress said that she won’t come to terms with him not being with her anymore and confessed that Sushant was the one who made her believe in love and the power of it. “You taught me how a simple mathematical equation can decipher the meaning of life and I promise you that I learnt from you every day.” her post read.

She called Sushant as “The greatest physicist” and believed that the “other” world of stars, moon and the galaxies would have welcomed him with open arms. She also expressed her wish of having him back by making a wish to the shooting star, which he became now. Rhea further revealed that Sushant told her the love they had is beyond both of them. “I guess you truly meant it when you said it is beyond both of us.” her post said.

Still struggling to face my emotions.. an irreparable numbness in my heart . You are the one who made me believe in love, the power of it . You taught me how a simple mathematical equation can decipher the meaning of life and I promise you that I learnt from you every day. I will never come to terms with you not being here anymore. I know you’re in a much more peaceful place now. The moon, the stars, the galaxies would’ve welcomed “the greatest physicist “with open arms . Full of empathy and joy, you could lighten up a shooting star – now, you are one . I will wait for you my shooting star and make a wish to bring you back to me. You were everything a beautiful person could be, the greatest wonder that the world has seen . My words are incapable of expressing the love we have and I guess you truly meant it when you said it is beyond both of us. You loved everything with an open heart, and now you’ve shown me that our love is indeed exponential. Be in peace Sushi. 30 days of losing you but a lifetime of loving you…. Eternally connected To infinity and beyond

Sushant Rajput singh died by suicide on 14th of June, at his Bandra, Mumbai home. The preliminary post mortem reports revealed asphyxiation by hanging as the cause of death. Sushant’s demise shocked the entire country as people started predicting the reason behind his death on their own. Enormous number of people blamed the “Nepotism” in Bollywood industry and trended hashtags against it.

A video of Chief minister Edappadi K Pazhaniswamy advising people not to hurt a cow which interrupted the campaign is trending in the social...

Three more girls including a 17 year old college student complained against Kasi aka Suji Demo for sexually abusing them. Reacting to these complaints,...