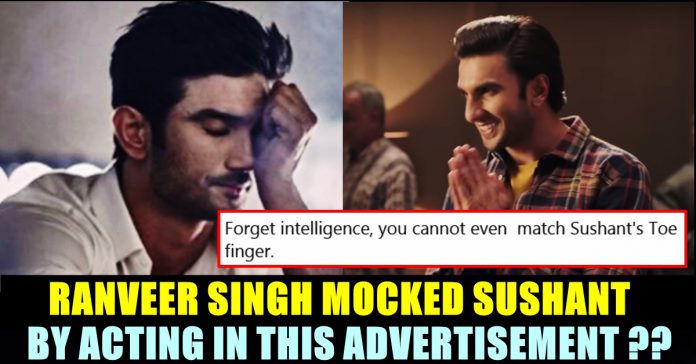 In the advertisement which is subjected to controversy, Ranveer Singh could be seen uttering a number of scientific terms while answering to his relatives who keep asking what are his plans for the future. Ranveer says, such questions could be answered only by using a “mad angle” to promote the product.

Watch the advertisement below :

What the hell do you mean by using these terms??
𝗠𝗮𝗸𝗶𝗻𝗴 fun of our @itsSSR 😑

The advertisement didn’t go well with the fans of the “MS Dhoni” actor as they believed that the ad is indirectly mocking at their favourite actor’s affinity to science. Many of them mentioned that Sushant is the only person in Bollywood who always spoke about his love for science and others said that Sushant was the only person in Bollywood who was “clever enough” to talk such way.

A fan shared a video of Sushant talking about science in an earlier interview and added that Sushant is intelligent than the rest of the Bollywood.

“The importance of acknowledging of nuance”
“As you grow to that stage you acquire several skills among which is also the innate ability to recognize
nuance both visually and verbally”.#NoSushantNoBollywood #BoycottBingo pic.twitter.com/ZgN0ytG0K3

“When life gives you Singh, be like Sushant Singh not Ranveer Singh” said one of a follower while sharing “Boycott Bingo” hashtag whereas another one asked Ranveer “I just want to know who dubbed your portion in the ad?” in his tweet. “I’m sure you don’t know meaning of a single word here! If any chance you know, brief me what is Algorithm! Or what is Photon! Level matters, mocking doesn’t!” he added.

@ascionline We find @BingoSnacks recent advertisement with Ranveer Singh very offensive to late actor Sushant Singh Rajput. It mocks his ideologies which we respect. It has hurt public sentiments. We like the advertisement taken down. Thank you.#RepublicRoar4SSR #BoycottBingo https://t.co/dhVSJHEFLS

@RanveerOfficial I just want to know who dubbed your portion in the ad?
I’m sure you don’t know meaning of a single word here!
If any chance you know, brief me what is Algorithm! Or what is Photon!
Level matters, mocking doesn’t!#BoycottBingo #NoSushantNoBollywood pic.twitter.com/gA32iyAY51

See how Ranveer Singh and bingo together make fun of SSR.
Their tagline should be “Brand of India but not pride of India” #BoycottBingo#RepublicRoar4SSR pic.twitter.com/CJcSu7KeCP

Yeh darr acchha laga.
‘Like/dislike” & “comments” are hidden.
If you dont have audacity to face the heat of public anger (that too by virtue of your own deed) then ou should have thought of it while writing script.@amairas_07 @PhotonSupport #BoycottBingo#NoSushantNoBollywood pic.twitter.com/7RVI9qE07l

We demand not only an apology, but also removal of Ranveer as the brand ambassador of Bingo !!

Nobody can come out and mock Sushant on our faces. We won’t tolerate it and won’t let it happen.#BoycottBingo

Unqualified & druggy @ranveerOfficial talking about photons and aliens in Bingo ad! These shameless ppl don’t even know the concept of science, but comes forward to insult an honest person like Sushant.

Meanwhile ITC foods released a statement saying that the allegations were “completely false, erroneous and mischievous”. The company confirmed that the shoot of the advertisement took place during October month of last year which was way before Sushant’s demise. It cited the delay in launching the product caused the release of the ad at this time.

The company requested public not to fall prey to such mischievous posts and said “Such kind of erroneous messages are likely knowingly spreading falsehoods” in their clarification. “The recent Bingo! advertisements was shot more than a year ago in October 2019. It is being aired this year because of delay in the launch of Bingo! Mad Angles Cheese Nachos and Bingo! Mad Angles Pizza due to Covid-19 pandemic” they added.

Previous articleMan Spewed Hatred At “Kazhugu” Fame Krishna !! He Replied
Next articleKarthik Replied To A Follower Who Questioned About BIGG BOSS Memes !!

Actor Raghav who is known for sharing screen space with Aishwarya Rai in Superstar Rajinikanth's "Enthiran", came up with a video in his Instagram...

Popular Director Gunasekhar's daughter and budding producer Neelima Guna, brushed off the abortion rumours that were made on Samantha by saying that she was...