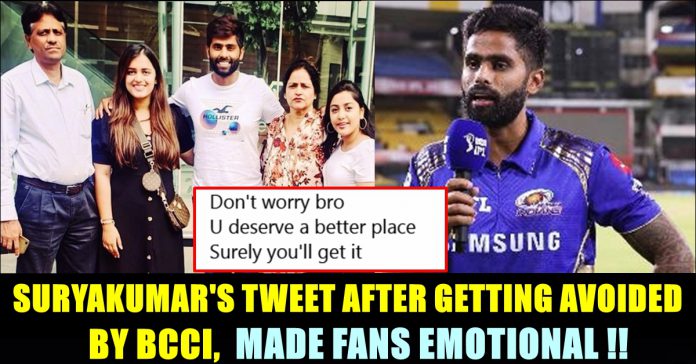 As soon as Board of Control for Cricket in India announced the squad for the upcoming Australian tour, mixed reactions has been pouring in the Internet, judging the selection of the selectors. A set of fans blaming the selection committee for not naming Rohit Sharma in the squad despite of the update provided by the committee. They said “The BCCI Medical Team will continue to monitor the progress of Rohit Sharma and Ishant Sharma” while updating about the exclusion of Ishant Sharma and Rohit Sharma.

Fans of the cricketer who didn’t convince stating that BCCI is trying to make KL Rahul as the second biggest player in the team. A video uploaded by the official twitter handle of Mumbai Indians in which Rohit could be seen hitting the nets, added fuel to the agitation of “the Hitman” fans. Meanwhile, exclusion of another Mumbai Indians player also became a subject to debate in the online platforms.

Surya Kumar Yadav who has been performing well in the IPL tournament for past few years, hasn’t got a chance to represent the national team yet. He who is dubbed as “Indian AB DE Villiers” is known for his consistency and has a very good first class records. “Don’t know what else Surya Kumar Yadav needs to do get picked in the team india.. he has been performing every ipl and Ranji season..different people different rules I guess @BCCI I request all the selectors to see his records” said Harbhajan singh in his tweet to support the selection of Surya.

Don’t know what else @surya_14kumar needs to do get picked in the team india.. he has been performing every ipl and Ranji season..different people different rules I guess @BCCI I request all the selectors to see his records

Manoj Tiwary also posted a similar tweet about Surya Kumar Yadav and added that Axar patel also deserves a place in the team.

Hard luck @akshar2026 and @surya_14kumar on not making it to the indian team dis time. Some years down d line, few cosy group of people will say that u both were born/played at d wrong Era but i would say u cud have easily played along side ur competitors 👍

Meanwhile, after the announcement, Surya Kumar himself came up with a tweet denoting that his family is his everything. Uploading a picture with his family members at the wee hours of Tuesday, he wrote saying “You all play the lead role in the movie called ‘MY LIFE’”

You all play the lead role in the movie called ‘MY LIFE’ ❤️ pic.twitter.com/SWzfshioMS

On seeing this post from him, fans got emotional and recalled a statement he said earlier regarding his selection to the Indian team. The youngster said “My father always checks all the websites any time an Indian team is announced. He calls me as soon as he sees it and tells me ‘your name is not there’, I tell him ‘that’s not a problem'”

Check out some of the reactions for his post below :

💔💔💔 bhai one day you will be king.. Don't worry cham 💙 pic.twitter.com/Z6dZEfztyN

Don't worry bro, ur consistent and we know that… Surely u will play fr Indian team and will be a best debut than anyone else

We love you SKY 💙 pic.twitter.com/5zVX3LfJXW

We cannot accept prithvi shaw and any one before you in indian test team … totally unacceptable ……too bad bcci ….

Previous articleMarlon Samuels Slammed Ben Stokes & Dragged His Family For A Comment He Made !!
Next articleVarun Chakravarty Acted In This Tamil Film ?? Video Goes Viral

We are witnessing many kind of posts and videos in social media from people who are trying to keep themselves engaged. But Julie of...

Chinmayi openly bashed at the veteran filmmaker Bhagyaraj for his speech on women about being safety. Followed by Radha Ravi and few more...