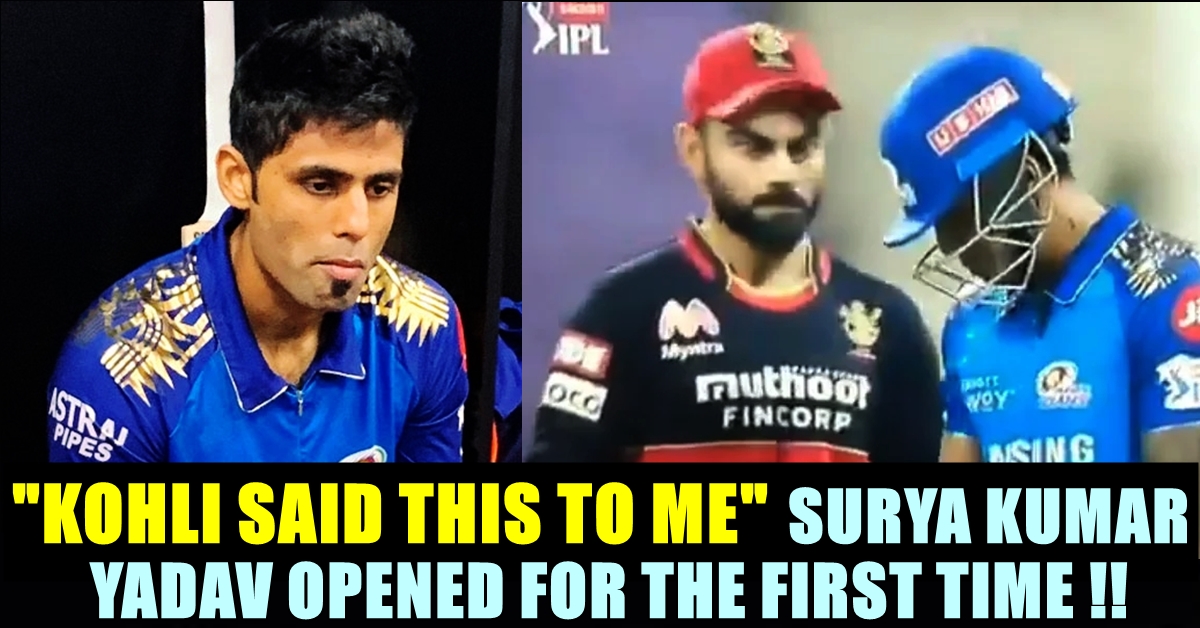 Surya Kumar Yadav of Mumbai Indians, finally opened on what happened on the day when he and Virat Kohli had a face off with each other. The cricketer revealed that he was under pressure during that match as his name didn’t take place in the Indian squad for Australia. He said what happened on that day was just “instinctive” and made it clear that he is a big admirer of Virat Kohli since a long time. He also revealed how it went when he met Kohli after that incident.

In the league match between Mumbai Indians and Royal Challengers Bangalore, a rift between Surya kumar Yadav and Virat Kohli took place after Kohli collected the ball faced by Surya Kumar Yadav for a number of times at the Forward point. A video of the duo staring at each other for a long time went viral among the netizens with reactions blaming both the cricketers.

Surya, while recalling about the moment, started with a laugh and said “Yeah, it was fun out there I mean I was under pressure because I badly wanted to deliver in that game as I knew that there was a big match coming. I was really happy to contribute at that moment for the team” who went on to add “What that happened was just instinctive, I think from both ends because I have been looking up to him since he’s been dominating world cricket for a long time.”

“His (Kohli) energy and his domination and everything has been just spot on in whatever format he plays for whatever team. I was really happy looking at that and really excited as well that a lot of responsibility also on my shoulder currently and it will be great if I take the team ahead and win it for Mumbai to take them to the top” he said.

While talking about meeting Kohli after that incident, Surya said “After the game it was completely normal because he just walked by the side and said “well played, great knock” and all that. It was just normal like just another day like how you meet everyone, how you meet your friends at practice. But for that 60-65 minutes in which I was batting, it was hell lot of pressure but I really enjoyed that in the middle” said Surya in the interaction.

In the match, during the end of 13th over, Surya tried to hit Dale Steyn at the extra cover but the ball was fielded by Kohli. Since, it was the end of the over, Kohli walked towards the crease with the ball and Surya stood there with a deadpan expression on his face staring at Kohli. Both the players starred at each other before Surya moved on with the bat.

Surya kumar Yadav has always been a big admirer of Virat Kohli which is evident through his old tweets. Most recently, on seeing a practice video of the national team’s captain Kohli, Surya replied to it writing ““Energy, Sound, can’t wait to watch Domination #theBrand” as his comment.