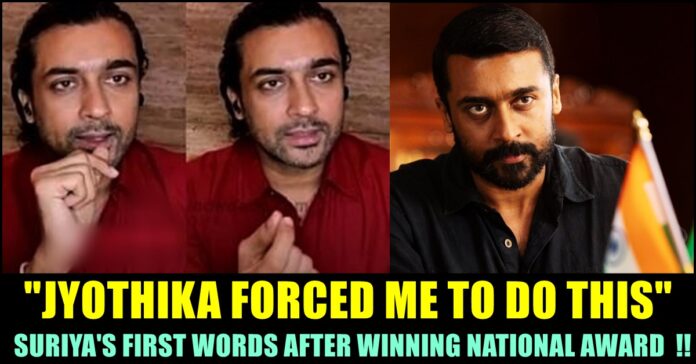 Versatile actor Suriya came up with a post in his official twitter handle, expressing his gratitude after winning national award for the first time. Apart from mentioning Sudha Kongara and the team of Soorarai Pottru for winning five national awards, in his post, the actor thanked director Vasanth and Manirathnam for making his debut possible.

On Friday, the winners of 68th National film awards were announced in New Delhi. The Best actor award is going to be shared by Suriya and Ajay Devgn for acting in “Soorarai Pottru” and Tanhaji : The unsung warrior respectively. Actor Suriya who is known for his versatility and acting skills is getting his first national award in his career which spans more than 25 years.

As soon as Suriya won the national award as the best actor for the first time in his career, fans of the 46 year old couldn’t keep calm as we could see them celebrating in Twitter by trending hashtags. Apart from the fans, a number of celebrities including actors Dhanush, Akshay Kumar, Keerthy Suresh wished the actor for his feat. In his letter, along with the crew members of “Soorarai Pottru”, director Manirathnam who produced his first film and director Vasanth, Suriya dedicated his achievement to Jyothika who forced him to do the film. He also dedicted the national award to his children. 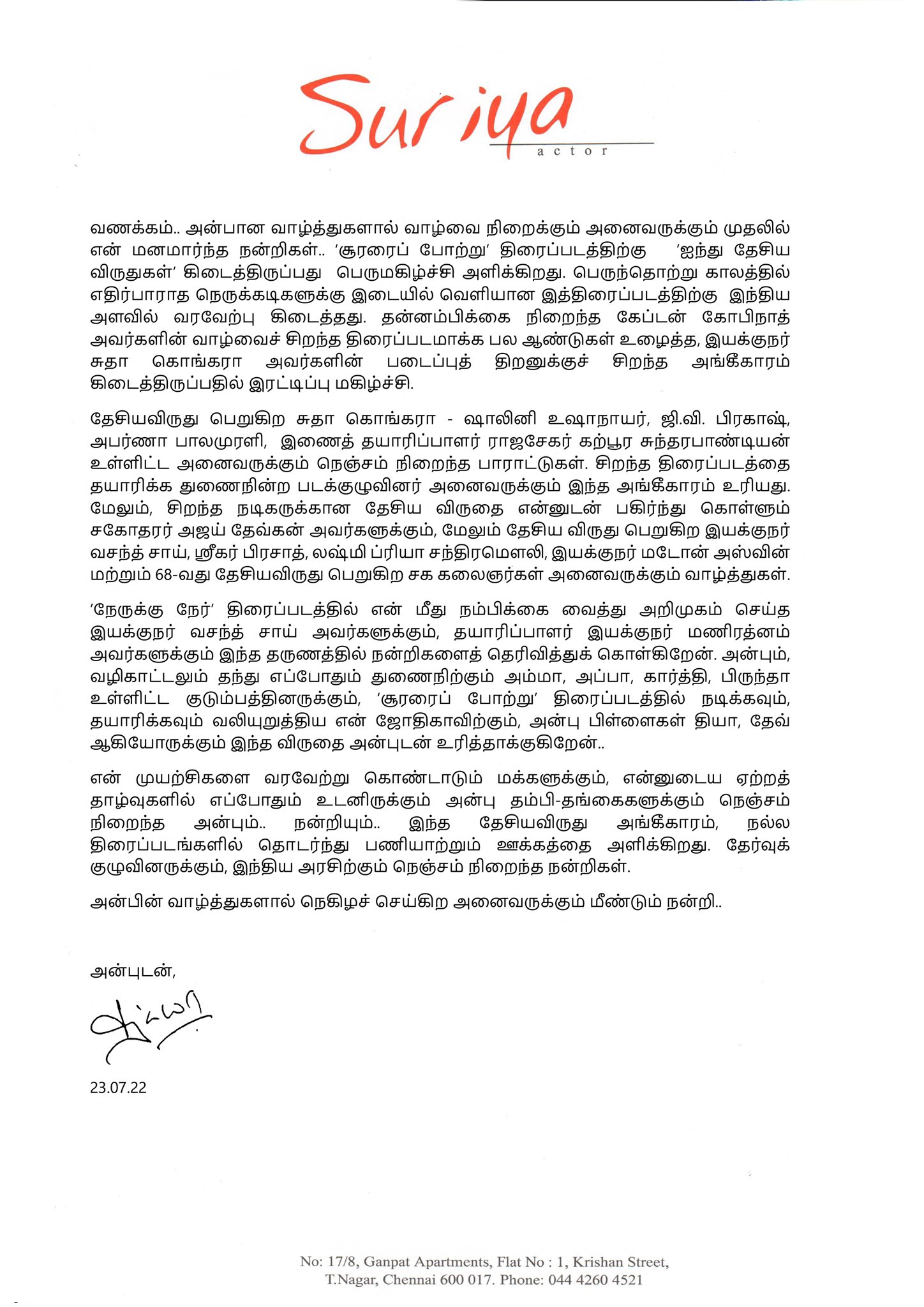 Expressing his gratitude regarding the same, Suriya, came up with a personal note in his twitter handle. “Vanakkam! My heartfelt thanks for all the love & good wishes that has reached us & enriched our lives so far … We are ecstatic with the Five National awards for Soorarai Pottru. The overwhelming reception for our ilm which was released directly on OTT during a pandemic, has made our eyes well up in joy. Our happiness is doubled at this National recognition for Soorarai Pottru, as it is a testimony of Sudha Kongara’s many years of hard- work& creative vision of Captain Gopinath’s story” the actor said in his post.

“My heartfelt congratulations for the National award winners of our film Aparna Balamurali (Best Actress), GVPrakash (Background score), Sudha Kongara & Shalini Usha Nair (Best Screenplay). My sincere appreciation and gratitude to all the talents who stood by us during the making of this good film. The Best Film award is a great recognition for team 2D and I thank them along with my best friend &CEO Rajsekar Karpoorasundara Pandian.
I extend my gratitude to Director Vasanth Sai & Filmmaker-Producer Maniratnam who
placed their faith in my acting abilities and gave me my first film, Nerukku Ner” Suriya further said.

“My heartiest congratulations to my fellow Best Actor winner Ajay Devgn and other National award winners from Tamilnadu, Filmmaker Vasanth Sai, Editor Sreekar Prasad, Actor Lakshmi Priya Chandramouli, Filmmaker Madonne Ashwin and other award-winners from other States of our country, for the year 2020, in this 68th National Film awards.
My special thanks to my Jyotika, who insisted I should produce& act in Soorarai Pottru.
My love and “Thank You” to all those who have encouraged my efforts so far and to my
Amma & Appa, Karthi & Brinda, who have supported me always. I dedicate this award to
my kids Diya and Dev and to my loving family” Suriya said in

“I share this joyous moment with all my brothers and sisters who are out there, who have
shown me immense love and acceptance right through my career. My heartfelt thanks to
you all my #anbaanafans The National Award gives me the motivation to work harder and walk my talk… and give you all good films, now & always. My sincere thanks to the Government of India and the National Awards Jury for this high recognition of our work.
Ionce again thank each and everyone of you for your love & good wishes” he concluded.

Previous articleSrimathi’s Family Demanded Compensation From Government ??
Next articleFor Not Getting Views In YouTube, Youth Ended His Life!!

Anitha Exposed A Fraud Who Cheated Girls In The Disguise Of A Casting Director !!

Anitha Sampath who rose to fame among Internet audience through the Kamal Haasan hosting Bigg Boss show, came up with an Intsgaram story exposing...