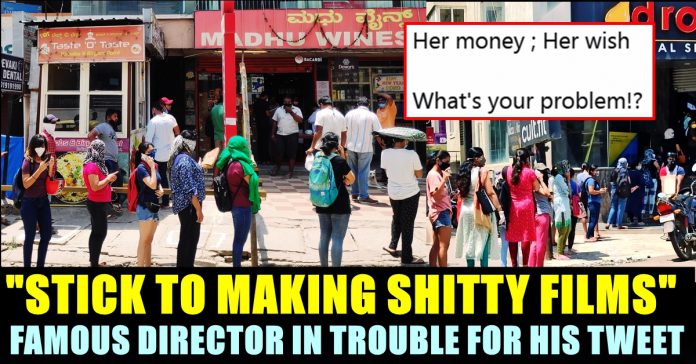 A particular picture of nearly a dozen number of women standing in queue to buy liquor in Bangalore is going viral in social media platforms with various kind of captions. Due to the relaxation in lockdown, implemented by the ministry of home affairs, large number of people gathered outside liquor shops in Bangalore on Monday morning. The liquor shops in Karnataka are functioning from 9 AM to 7 PM. However the relaxation is not applicable in containment zones. This ruckus has forced authorities to place restrictions on how many bottles an individual could buy.

People started forming queues from 5 A.M in the morning to buy liquor in the streets of Bengaluru. They started crowding various parts of the city including Indiranagar 100 feet road, central Bengaluru on MG road and Cunningham road in Vasanth road crowded. As there are high chances for the shops to get closed, people are buying liquor bottles as much as they can.

The Karnataka government ordered certain liquor shops to open which were closed since 22nd of March. A single person is restricted to buy more than three bottles of spirits, six bottles of 650 ML beer or 12 bottles of 300 ML beer per person. A separate line for women was formed in a wine shop in Banglore to help them maintain social distancing. That particular picture attracted the users of online medium to express their comments.

I don't know if 33% (women's) quota was maintained properly before.. but atleast here it seems like it's applied 🙂 .. separate queues for men and women are seen outside a liquor stores across #Bangalore. #equality pic.twitter.com/urkLAbuR88

Women Exploitation at it's peak.

Meanwhile director Ram Gopal Varma who is known for his controversial tweets, uploaded the picture and wrote a caption in a way of mocking the women standing. Known for working across the country as a filmmaker and writer, Ram Gopal Varma directed actor Suriya in “Ratha Sarithiram” which was released in the year 2010. In his tweet, the filmmaker wrote “Look who’s in line at the wine shops ..So much for protecting women against drunk men “

Look who’s in line at the wine shops ..So much for protecting women against drunk men 🙄 pic.twitter.com/ThFLd5vpzd

This tweet severely criticised by the users of the social media site. Many of them accused him of being misogynist and to our surprise, man who clicked the picture came in to defend the women. Check out some of their reactions below :

1. You tweet a pic I clicked and 2. your tweet is twisted and sexist. If you were there, you would see that there were hardly a dozen women standing while there were hundreds of men in a serpentine queue. The police official on duty said a separate line was made to protect women.

Here goes the misogynist; so if a woman drinks does that make her eligible for harrasment?

The audacity of women to stand in the liquor queue !

If the drunk men and otherwise could only keep thier balls to themselves rather than swinging it perversely, none wud need any protection.

Her money ; Her wish

Man, to stay relevant why don't you stick to making shitty films or songs. Just make them and manufacture controversies around it, which you do usually. If there's outrage on this. TV9 and other Telugu media will have a "debate" by inviting this misogynist. https://t.co/loUpPGI5Q9