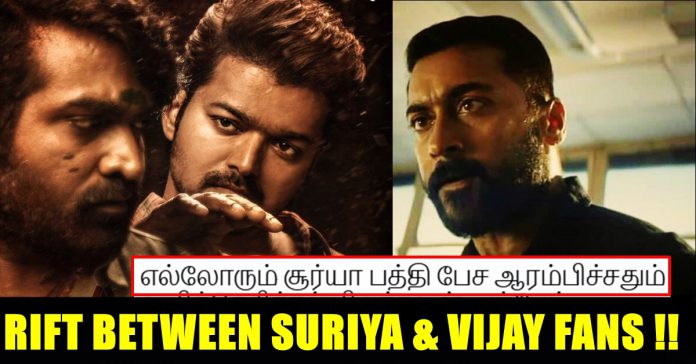 Fan of different actors fighting with each other during festive season is not something new to Tamil cinema. Back then, Fans involved in arguments in theatre premises during the release day but now, as theatres are closed, they are fighting with each other through online mediums. Lately, fans of actor Suriya and Vijay are expressing their disappointment over each other after the update on “Master” teaser surfaced in Internet.

Main reason behind the rift is, a number of Suriya fans in twitter, firmly believing that the update on Master teaser announced by the team only to dilute the immense reach of “Soorarai Pottru”. As soon as getting released, Soorarai Pottru gained a wide reach among cinema audience with positive word of mouth from both common audience and Suriya fans.

The film’s intense content and the splendid performance of the leads, made people to praise the film. Suriya who was struggling to give a break for a very long time, saw the light through “Soorarai Pottru” is what fans believed. However, exactly a day after the film’s release, “Master” team announced that they are going to release the teaser of their film on “Diwali” day.

The hashtags such as “Soorarai Pottru” and “Soorarai Pottru On Prime” which were trending on the top in twitter faded and hashtags such as “Master Update”, “Master Teaser” started trending on the top. Social media feeds filled with the posts of “Master Update” which irked the fans of actor Suriya. As a result of they started expressing their dejection.

“Some people couldn’t tolerate others growing in the field. They made fans ask for update all these days and came up with one at this time.” wrote fan girl of Suriya in twitter.

Another online user accused actor Vijay of being an attention seeker. “He (Vijay) made this announcement after seeing people talking good about Suriya” he said in his tweet.

Another fan went one step ahead and accused “Master” team of making an announcement everytime “Soorarai Pottru” had a release in Youtube platform.

– Suriya's Soorarai Pottru Was Released & Got Positive Reviews From Ppl..

– Vijay's Master Update Should Be Coming At 6Pm

Meanwhile , Vijay Trying To Divert People Towards Him..

This Is Shown That Cheap Mentality Of Vijay 👎👎#Valimai

#SooraraiPottru has completely dominated Master teaser announcement 😲
Never expected this to be honest.
Vijay is in his peak form and yet this is happening
Maybe after teaser release things may change.
Power of good cinema and Suriya's craze across south.

Vijay fans defended these accusations and countered the tweets of Suriya fans. However, Experts believe that Vijay decided to release the teaser on Diwali, not to fade “Soorarai Pottru” away, but to brush off the negativity that are doing rounds regarding himself and his father. S.A Chandrashekar, father of actor Vijay started a political party in the name of actor Vijay, minutes after which the actor denied having connection with the party. Since then, SAC has been interacting with media portals justifying his act. It is said that Vijay decided to go with the teaser only to brush of the negativities that were caused by his father.

Previous article“Good Night To Those Who Won At least One IPL Title” – Rajasthan
Next article“Irandam Kuthu” Director Walks Out Of Interview !! WATCH

Case Filed Against Kamal Haasan For Visiting Victims In The Hospital !! : WTF !!

case was filed against Kamal Haasan on Wednesday for visiting a Tuticorin government hospital with his supporters while Section 144 of the Indian Penal...

Doctor K Pratheep Kumar, an orthopaedic and arthroscopy surgeon shared the trauma he went through while trying to bury his deceased friend who is...