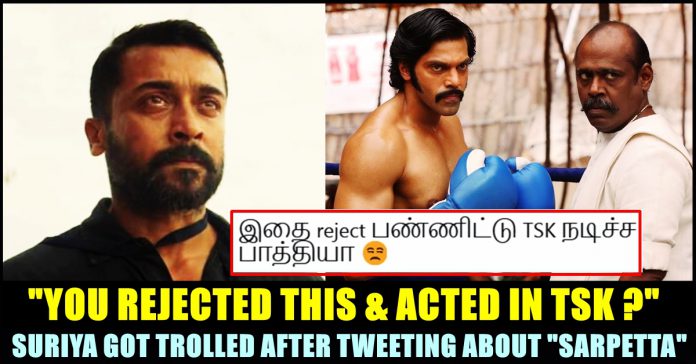 Suriya Tweeted After Watching “Sarpatta” !! Got Trolled For Missing The Film

Kollywood’s top-tier actor Suriya who was supposed to play lead in the recently released blockbuster film “Sarpatta Parambarai”, watched the film and uploaded a tweet appreciating the director, actors and technicians. On seeing his tweet, many including the fans of the actor expressed their regret over himself missing the opportunity to play “Kabilan” in the film. Director Pa. Ranjith, in an interview, said that he wrote the script by having actor Suriya in mind but he couldn’t get him play the lead role due to other commitments.

It is a widely known fact that Suriya was approached by Pa. Ranjith to play lead in “Sarpatta Parambarai” prior Arya. Pa. Ranjith, in an interaction, revealed that he was planning to do the film right after “Attakathi” but couldn’t do it due to the practical constraints at that time. Arya is being lauded by critics and audience for the way he pulled off the role which required a major body transformation.

“Sarpatta Parambarai” which focusses on a boxing clan that was successful at one period, facing down fall due to a raise of a couple of star boxers namely “Vembuli” and “Dancing Rose” from the opposite clan. “Kabilan”, an ordinary daily wager who is an ardent fan of the game, happens to enter the podium to save the pride of his clan and his master “Rangan”. With Arya playing the lead role, an ensemble cast that includes Pasupathy, John Vijay, Dushara Vijayan, Kalaiyarasan, Sanchana Natarajan, John Kokken, Shabeer, Anupama Kumar, Kaali venkat playing the supportive roles.

With majority number of positive reviews, the film is being widely watched by the fans across the globe. Characterizations and Castings are being highly lauded by the audience and critics. The film is also being appreciated for its art work as many could be seen lauding the period drama for bringing the mid 70s in front of their eyes.

Many influential personalities from film industry lauded Pa. Ranjith for pulling off “Sarpatta” with utmost perfection. Meanwhile, reports surfaced revealing about actors who missed to play some of the notable roles in “Sarapatt”. Veteran actor Sathyaraj was initially approached to play the “Rangan Vaathiyar” role, says reports and a media portal said that the actor wished Arya through phone call and regretted missing the opportunity to play the powerful character.

Now, actor Suriya came up with a tweet saying “Sarpatta Parambarai tells a story that was never said before. “It is astonishing to see the hard work of the director, actors and the entire film crew to transform the life style of North Madras people visually. Suriya congratulated the film crew by tagging Pa. Ranjith and other prominent artists who are associated with the project.

Reacting to this tweet of Suriya, many fans expressed their regret over the actor missing the opportunity of playing “Kabilan” in the film. “You have rejected this film and chose Thaana Searntha Kootam”, a follower trolled the actor whereas another one said “It could have been better if you had acted in the film.. But Arya displayed his full potential”

On the work front, Suriya is expected to be seen in “Jai Bhim”, “Vaadi Vasal”, “Guitar Kambi Mele”, “Etharkkum Thuninthavan” etc. Karthi is all set appear in “Sardar”, “Ponniyin Selvan”. Comment your views on the comments surfaced under Suriya’s tweet.

Previous articleFive Men Raped & Murdered A Female Goat !! Should Animals Wear Modest Clothes Too ?? : Social Media
Next articleShanthanu Sends A Special Message To The Meme Creator Who Trolled Him !!

Actress Priya Bhavani Shankar's reply to a follower who asked whether she wouldn't feel boring to dress up, do make overs and pose for...

For past 5 days, people of Tamilnadu has been worrying and glued with the news channels. They couldn’t even celebrated the Diwali festival wholeheartedly...