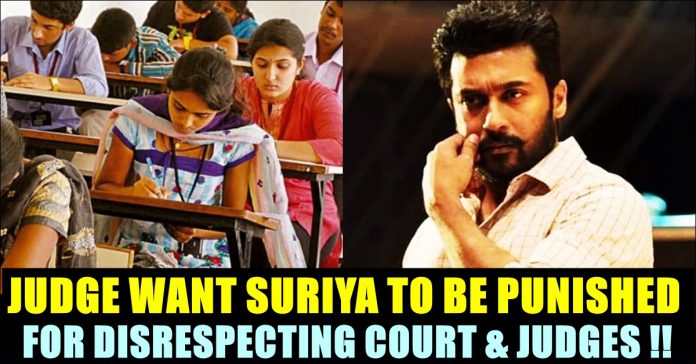 While entire social media came in to support the statement released by actor Suriya regarding the demise of 3 students who were supposed to write NEET examination on Sunday, Justice Subramaniam of Madras High court wrote a letter to Chief justice to initiate contempt proceedings against him for his allegation against the judges who ordered students to write the NEET examination amidst this COVID 19 crisis.

After Jyoti Sri Durga, two more students ended their life on Saturday due to the fear of facing the entrance examination called as “NEET”. Jyoti wrote a letter to her loved ones before hanging herself in her home in Madurai whereas two more male students who belongs to Dharmapuri and Namakkal district died by suicide. These reports created huge outrage in the state as a large number of people raised voice against the NEET examination. Actor Suriya who is also known for his socially responsible activities such as providing free education to poor students, released a statement slamming the system which forced students of take such decision.

The founder of “Agaram” said that there is nothing shameful than condolencing students before going to examination instead of wishing them to write it well. He said that it worries him on realizing the fact that students are forced to prove themselves by writing examinations even during the ongoing pandemic situation which is a threat to their life.

“The government which is supposed to provide equal chances to everyone, brining an educational system as law that encourages discrimination. People who couldn’t understand the reality of poor people are deriving the educational policies.” Suriya said in his statement, directly attacking the central government.

Further, he went on to criticize the court which ordered students to write exam during this pandemic situation. “The court which is providing justice through “Video conferencing”, in the fear of losing life due to COVID 19 spread, ordering to students to go the centres and write exams without fear” he slammed.

Suriya also expressed his disappointment over the people who found grammatical mistakes in the death notes of the students. Read : “Filled With Tanglish, Not One Proper Sentence” – BJP’s Kishore K Swamy On Jyoti’s Final Letter

“The “Manu neethi” kind of exams such as NEET is stealing, not only the chances of our children, but also their lives.” read the statement of the actor who requested parents and teachers to be careful from now on. “Exams should not determine the talent of our children. We must make them (students) realize that there is a beautiful life beyond these kind of silly examinations.” he added.

The actor further compared the ruling government with Drona of Mahabharata who asked for Ekalavya’s right thumb, knowing that the loss will hamper Ekalavya’s ability to pursue archery. “Modern age Dronas are demanding our children to prove them by writing examinations at 6th grade. Even if our children succeed in those challenges, they are waiting with dangerous weapons such as “NEET” to kill them” the actor expressed his emotion.

“We should not stand and watch the demise of innocent students. We should act as a society that stands against NEET which is destroying the dreams of children from ordinary families” the actor registered his stand firmly.

While accolades poured from all over the Internet for Suriya for his bold statement, Justice S.M.Subramaniam of Madras High court has written to chief justice Amreshwar Pratap Sahi, insisting on the need to initiate suo motu criminal contempt of court proceedings against Suriya.

The way Suriya stated how court is providing justice through “video conferencing” and asking students to get out and write exam amidst COVID 19 crisis made the judge to write letter to the Chief justice. “The said statement in my considered opinion amounts to contempt of court as the integrity and devotion of the honourable judges as well as the judicial system of our great nation are not only undermined, but criticised in bad taste, wherein there is threat to the public confidence on the judiciary,” his letter to chief justice read.