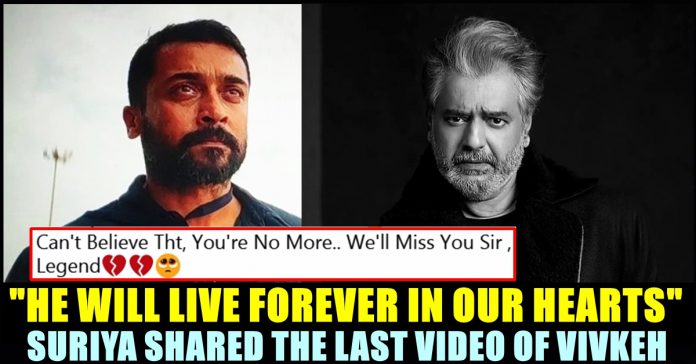 Actor Suriya shared the video of actor Vivekh’s last show which is going to be released in Amazon Prime from 27th of August. The series which is titled as “LOL Enga Siri Paapom” shows Vivkeh hosting with “Mirchi” Shiva. Premji, “CWC” fame Pugazh are some of the other celebrities who took part in the show which is evident through the promotional video shared by Suriya Sivakumar who shared screen space with the legendary comedy actor in a number of films.

The demise of actor Vivekh left his fellow actors, fans and Tamil speaking social media space in a dejected state. Vivekh is known for making comedies in his movies with a touch of his lateral thinking ability. He talked about providing education to oppressed children, caste discrimination, superstitious beliefs in Tamil culture, ideologies of reformer Periyaar, dreams of Abdul Kalaam, poems of Bharathiyar and about many other progressive developments for the society through his films.

On 17th of April, Vivekh died in a private hospital after suffering a cardiac arrest. An unconscious Vivekh was brought to the SIMS hospital, a day before. He reportedly suffered a cardiac arrest due to a 100% blockage in heart vessel. “It took nearly an hour for the doctors to remove the block. He was then put on an ECMO. His is an acute coronary syndrome with cardiogenic shock and not related to the vaccine,” Dr. Raju Sivasamy said and confirmed that Vivekh wasn’t infected with COVID 19 virus.

Ever since the actor left the world, fans have been sharing the clippings and dialogues from his films in a way of remembering him. Now, actor Suriya, through his official twitter account, shared the video of show Vivekh participated before his death. “He will live forever in our hearts.. It’s an honour to share
@actor_vivek sir’s last work who made us laugh and also passed on socially responsible n progressive thoughts” said Suriya while sharing the video. the actor shared screen space with Vivekh in films such as “Perazhagan”, “Singam series” etc.

He will live forever in our hearts.. It's an honour to share @actor_vivek sir's last work who made us laugh and also passed on socially responsible n progressive thoughts! pic.twitter.com/vz1VVoDHqP

seems so hilarious but at the same time, that was an emotional attack ❤

missing him in immense ❤ and yeah, he'll be living in our hearts ❤

Such a Gem You're @Actor_Vivek Sir ….I was grown up by Seeing Ur Comedies From Childhood🥺 and Still Now I Can't Believe Tht, You're No More.. We'll Miss You Sir , Legend💔💔🥺 https://t.co/M22a34UP0P

I don't know how this show is gonna be, but I get to see @Actor_Vivek and that's all that matters ❤️ https://t.co/jVJw65Hhtm

“Rs.2 Crore Is Enough For Me To Make A Film”- “Sembaruthi” Karthik Seeks Financial Help From His Fans !!

Television actor Karthik who is known for appearing in a serial named "Sembaruthi" after debuting through Vijay TV's "Kana Kaanum Kalangal", released a video...

Along with fans, celebrities couldn't restrain themselves from expressing their excitement on Dhanush getting committed to Netflix's high budgeted Hollywood project. After knowing that...

Income Tax department officers has found Rs.65 Crores during raids on the powerful financier in the Tamil film industry, according to NDTV. It is...