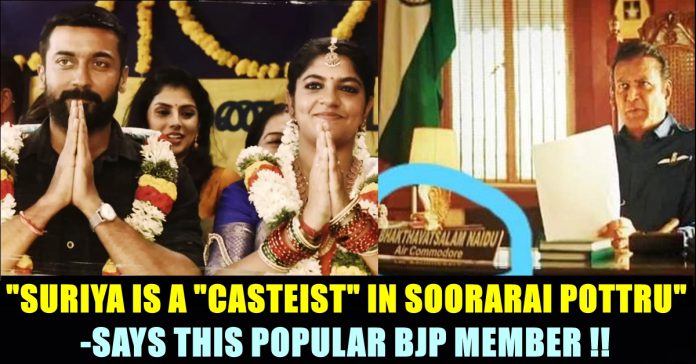 Controversial journalist Madan Ravichandran who recently joined Tamil nadu BJP party, criticized the film “Soorarai Pottru” by saying that the makers have made the film with a “casteist” mindset. Madan Ravinchandran who worked for Win TV and Cauvery digital news, recently started a youtube channel and received positive response from a set of people. While working for the above mentioned channels, Madan questioned different politicians from various parties.

With just 6 months to go for the state assembly elections, Madan Ravichandran joined BJP party to help the party taste their first victory in the state. He joined on 12th of October, in the presence of senior BJP leaders at BJP headquarters in New Delhi.

Madan is one of the many BJP politicians who are pretty much active in the social media platforms, calling out the people who are acting against their party. Now, after Suriya and Sudha Kongara’s “Soorarai Pottru” film released on “Amazon Prime”, Madan came up with an accusation against the makers of the film.

“Soorarai Pottru” became the first release of a top-tier actor after the COVID 19 outbreak. Ardent fans of Tamil cinema watched the movie overnight and are reviewing it through their respective social media accounts. The film is receiving widely positive reviews for its intense content and for the performance of the leads.

The film’s plot revolves around Nedumaaran Rajangam’s constant struggles to initiate an Airline of his own to make simple people travel in it. He is being confronted by Paresh, an influential personality who is already running a successful airline. From the start, the film stands against caste discrimination and against the discrimination that takes place between rich and poor. Dialogues such as “I want to break the cost barrier and the damn caste barrier too”, “You are a socialite, I am a socialist” and the lyrics of the song “Mannurunda” raises voice for the oppressed. At one point, Maara could be seen marrying Bommi by wearing a black shirt, in a way of representing the ideologies of leader Periyar.

Now, on seeing the film, Madan came up with a tweet saying that Suriya who identifies himself as a “Periyaarist” in the film, is a casteist in the film as he calls his higher official in air force as “Naidu”. “Sudha (Kongara) understood that people who are identifying themselves as “Periyaarist” are the people who have “casteist” thoughts deep in their heart” he said in his tweet.