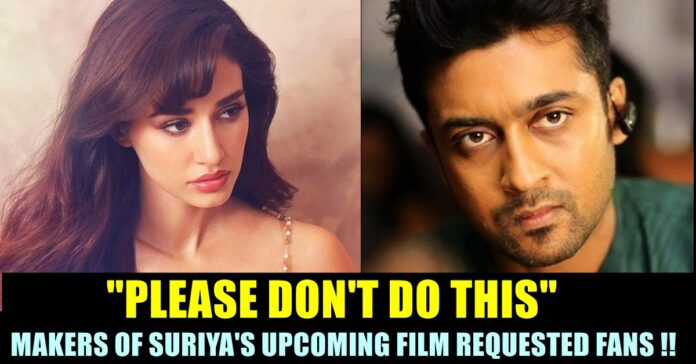 Famous movie production house Studio Green which is currently producing the most expected “Suriya 42”, on Sunday, came with a most important request to fans and others. On seeing a number of pictures and videos from the shooting spot of the upcoming film getting leaked, the production house requested everyone not to share them online. Requesting those who shared the clips and pictures to delete/remove, the roduction house also warned them of legal actions.

Earlier, pictures of Bollywood actress Disha Patani who is making her Tamil debut and Suriya were doing rounds in social media platforms. In one of the leaked images, the actress was seen wearing a pink attire and director Siva was also caught in the spot along with the actress. Apart from that, a clip which is believed to be from the set of the film, reveals a scene set in the beachside restaurant.

Reacting to the leaked images and videos, Studio Green issued a statement saying that the makers are creating the project with their sweat and blood. They expressed their wish of presenting the film exclusively in theatres as a gift to the fans and requested everyone who uploaded the pictures and videos to delete them immediately.

Here’s the motion poster of the film :

“A humble request to everyone! We have noticed that few are sharing “Videos and Pictures” from the shooting sets of our upcoming production #Suriya42 Every single work involves the blood and sweat of the entire team. We want to gift this movie as a grand theatrical experience to everyone” read the note.

“It would be a great favour if you delete/ remove the published videos and pictures, and we request not to share the same in the future. We would also like to inform you that strict legal actions under Copyrights Infringement’ will be taken against the ones who continue to do so.. – Team Suriya42″ it further said.

“Please Don’t Share Any Shooting Spot Videos and Photos about #Suriya42” caption of Studio green’s post read. Check it out below :

The film which marks the first collaboration between “Siruthai Siva” and Suriya, is expected to an ambitious project that is going to be released in 10 languages. The motion poster of the film suggested a fantasy one and fans are eagery waiting to witness the film in theatres. Apart from that, Suriya will also be seen in films such as “Vangangaan”, “Vaadi Vaasal”, “Vikram 3” etc.

Previous articleDirector Pa. Ranjith’s Speech About Raja Raja Chozhan Is Trending Ahead PS 1 Release !!
Next articleFamous Actor Got Arrested For Abusing A Female Anchor On Air !!