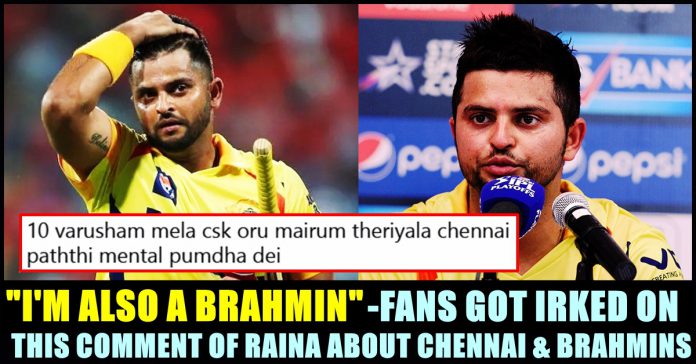 A statement made by Suresh Raina, a most loved batting all rounder of team Chennai Super Kings, irked a number of online fans. The cricketer who is playing for the Chennai based team since the inaugural season of IPL tournament, linked Chennai with Brahmins when he was asked to tell about how he is embracing the culture of Chennai city. His opinion irked a number of fans who believe that Chennai is known for its diversity and expressed their displeasure over the ignorance of Raina who is playing for the city for more than 10 long years.

Raina who announced his retirement from the International cricket along with Dhoni, continues to play in IPL for team Chennai Super Kings. The cricketer who is known for his aggressive batting and terrific fielding efforts, became a household name for Chennai team and became one of the most loved cricketers for state Tamil nadu.

Being a Kashmiri Pandit, from Rainawari, Srinagar, Raina was raised in a military backgroundand is currently living in Rajnagar, in Ghaziabad, Uttar Pradesh. In a recent interaction with media, Raina was asked to comment on how he embraces the culture of Chennai. “We have seen you in Veshti, We have seen you dance and all and have seen you whistle, how have you embraced the Chennai culture ?” asked the anchor to Raina.

Replying to him, Raina started with “I think I am also Brahmin. I have been playing since 2004 in Chennai. I love my teammates”. The way he linked the entire city with Brahmin community shocked a number of social media users who started expressing their disagreement with the comment of the left hand batsman.

Did #SureshRaina just say ‘Am also a Brahmin’ on national telivision..😂😂

“Brahmin only here Mylapore. Not All Chennai 10 varusham mela csk oru mairum theriyala chennai paththi mental pumdha dei” a Twitter user said on seeing the video Raina whereas another user said that he lost the respect he had on Raina.

Brahmin only here Mylapore. Not All Chennai

The greatest trick Tambrahms pulled was convincing the rest of the world that Chennai is full of them! It was changing in the past 8 years and back again🤦‍♀️

Good reason why we need reservations to continue.. Enough equating tamil to idly dosai and sambhar, enough of coffee being most popular tamil beverage.. Enough of "sivasubramanaian venkatraman iyer"(fictitious Bollywood name) being representative of tamil.

Just another reason to hate Indian cricket.@ImRaina we loved you and supported you not because of you are a brahmin, If you think you are special because of your caste, you are a piece of shit to us. Get out Tamilnadu you moron. https://t.co/ZkUQ7e4cR3

B’wood half baked cinemas made everyone think that only Bharatanatyam and filter coffee are Tamil things.ffs its just mylapore things. You can understand how much the tn cricket association is brahminised by seeing Raina’s this talk. Tnca and csk both follow just Brahmin culture. https://t.co/opuIgyo335

Chennai culture has got nothing to do only with Brahmins,@imraina .. 10 years WTF you got to know about Chennai Or TN?
@ashwinravi99 you didn't tell him about this? https://t.co/0xM8Zohq2t

when many national players from TN are from the same community as Raina, obviously he can never know about the actual Chennai culture https://t.co/by2dyt6KzR