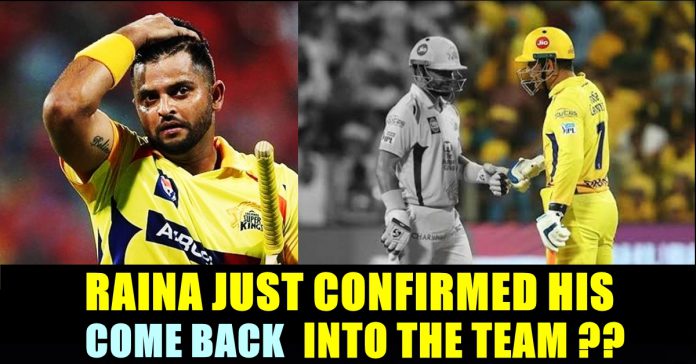 Batting all rounder of Team Chennai Super Kings Suresh Raina who is fondly called as “Chinna Thala” by CSK fans, uploaded a social media post only to leave the fans of the team in a dejected state. The tweet demolished the last ray of hope that CSK fans had regarding the return of the left hander in the team. He wished his yellow team, a very best ahead of the inaugural match of the 13th edition of IPL, in a way of confirming that he won’t be returning the team in near future.

Raina said that he couldn’t imagine the fact that he is not with the team today. “Wishing you all the success boys @ChennaiIPL. Unimaginable for me that I’m not there today, but all my wishes are with you. Sending you all the good vibes! Go get it! Flexed biceps #WhistlePodu” his tweet read.

Wishing you all the success boys @ChennaiIPL. Unimaginable for me that I’m not there today, but all my wishes are with you. Sending you all the good vibes! Go get it! 💪 #WhistlePodu https://t.co/G48ybhcbYR

Fans poured their loved towards the cricketer in the comment section of this tweet. “I couldn’t imagine someone else playing in the one down order” said one of a follower while reacting to the tweet whereas another fan hoped that he will come back soon. One of a fan believed that Raina will be back in this tournament as he mentioned just “Today” in his tweet.

Just see the tweet,, I am not there today,, means he will be back

The absence can't be filled but the void can be covered through winning. 💛

On 29th of August, it was announced that Raina is leaving UAE due to personal reasons. It was said that he will no longer be available for the whole tournament of IPL. Amidst the furore that took place followed by Raina’s exit from the Chennai Super Kings team, the cricketer came up with a couple of tweets requesting Punjab police to look into the heinous crime that caused the loss of two lives in his family.

Till date we don’t know what exactly had happened that night & who did this. I request @PunjabPoliceInd to look into this matter. We at least deserve to know who did this heinous act to them. Those criminals should not be spared to commit more crimes. @capt_amarinder @CMOPb

Recently, the cricketer uploaded post thanking Police for nabbing the culprits regarding the case.

This morning in Punjab, I met the investigating officers who reportedly have nabbed three criminals. I truly appreciate all their efforts. Our loss can’t be recovered but this will surely prevent further crimes to happen. Thank you @punjabpoliceind @capt_amarindersingh for all the help🙏

As the criminals are arrested and the fact Raina mentioning just “today” in his tweet instead of the “whole tournament”, let us believe that he will come back soon.

Amidst the rumours that surfaced saying Telugu actor Naga Chaithanya is dating actress Sobhita Dhulipala, a picture of the duo posing for a picture...