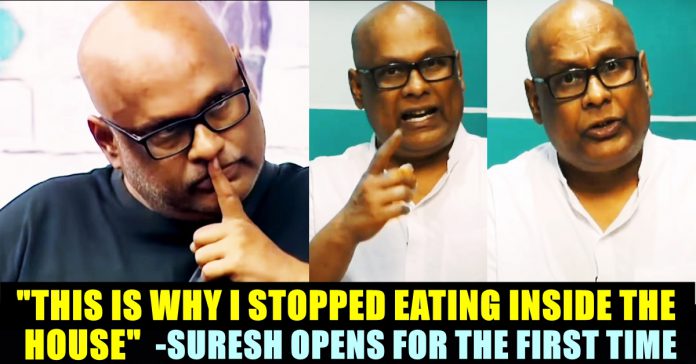 Suresh Chakravarthy who got evicted from the Bigg Boss house recently, has started giving interviews to youtube channels. Suresh Chakravarthy who acted as one of the main aspect of the ongoing season in the first two weeks, lowered his guard for the past few days. He who said that he decided to lay low in the house to Kamal Haasan last week, failed to occupy the screen space which would have helped him to gain votes from the audience.

Suresh Chakravarthy, the eldest participant of the ongoing season, made his acting debut in the year 1991 in K Balachander’s “Azhagan” featuring Mammootty, Babu priya and Geetha in pivotal roles. In the film, Suresh played a role named as Agarabannu sokku. Before entering the Bigg Boss house, Suresh was busy making cookery videos for his youtube channel. Through his Instagram account, Suresh called himself as an Actor, Anchor, Writer, Director and YouTuber.

Now, after coming out the Bigg Boss house, Suresh has shared about many incidents that took place inside the house. He also talked about almost all the contestants of the house and their behaviours. While talking about Suchi, Suresh said that her game went completely wrong as she is only seeing the show for just 1 hour. “I only know about what happens for the rest 23 hours” Suresh said in the interview.

Suresh also said that Sanam shetty, Archana Chandhoke and Anitha sampath are always aware of the camera and stayed conscious about giving content to the channel. Throughout his speech, Suresh blamed Archana saying that she supported Rio in tasks. He who called Archana as “Corona”, said that he stayed away from her.

Suresh also revealed why he stopped eating in the house during his final days of the show. He said that he stopped eating because people who voted for him in the Gabi case touched his food. “As she (Archana) raised her hand against me on that day, she would feed me more food to pretend that she cares for me. She will also boast about it to other contestants as I was begging for food in Australia.” Suresh said.

“Someone had told her that staying in the kitchen would help her to sustain in the game. She would never move from the kitchen. So I decided to stop eating to stop her doing her emotional stunts. At that time, Nisha cooked only rice. So I poured water in it and ate.” Suresh revealed the reason behind his strange behaviour before getting evicted.

Regarding Bala and Shivani’s romantic relationship, Suresh said that the 18 year old girl behaved very good and he doesn’t wants to talk about her behaviour as she is a daughter to a father and mother. He also dubbed Ramya Pandiyan as “Calculative Queen” and trolled Anitha sampath for her long speech during a task.

The 56 year old said shared about many other incidents that took place inside the house and is expected to reveal more in other interviews.