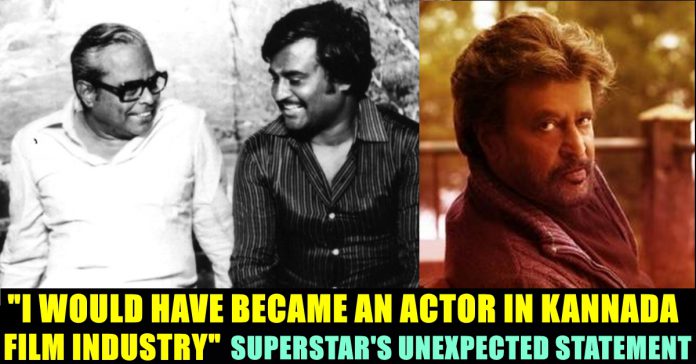 On the 90th birthday of legendary filmmaker K.Balachander which was on 9th of July, Superstar Rajinikanth came up with a 4 minute video to wish his Master, a Happy Birthday. Many stars including Kamal Haasan posted tweets to wish the progressive filmmaker of his time who contributed to nearly 100 feature films either as a screenwriter or director, thus becoming one of the most prolific filmmakers in the country. To our surprise, Rajinikanth, in his video says that he would have became an actor even if Balachander didn’t introduce him but the Superstar actor believes that he would have lasted only as a small time supporting actor in Kannada movies.

Superstar Rajinikanth whose career spans more than 40 long years, has earned the highest number of fans comparing to all the actors in India. Being debuted in Aboorva Ragangal of Balachander, Rajinikanth managed to act in 167 film so far and is still giving nightmare to his rivals. The actors of his age in India started doing supportive roles whereas Rajinikanth is still doing the role of protagonist in his movies and the most special thing about it is, the level of craze is still no less comparing to the level of craze he had in his prime time.

He was last seen in A.R Murugadoss’s “Darbar” and is expected to appear in “Annaththe” of “Siruthai” Siva who is known for his commercial blockbusters such as Siruthai, Veeram, Viswasam etc. Fans are expecting for a “Padayappa” kind of commercial film from this combination which is evident in social media. There are talks that the actor was also offered to contest for Chief minister post of the state in 1996 which he avoided. Now, the latest report had said that he is planning launch his party on November month.

In the video of which is currently streaming in Kavithalayaa youtube channel, Rajinikanth wished his Master with his whole heart. “I would have became an actor even if K.Balachander sir didn’t introduce me through his film. I would have lasted as a small time actor in Kannada film industry by doing villain roles and supporting roles. By this time, I would have retired as an actor if he didn’t introduce me in Tamil film industry” says Rajinikanth who goes on to explain how Balachander discovered the uniqueness in him.

“He is the reason behind this humongous fame I got today. He selected me, kept a new name for me, removed all the manners of me and identified my own plus points and introduced them to me. He made me an actor with the 4 film contract he assigned and introduced me as a star to Tamil film industry. My father , My mother, My brother and Balachander sir are the four gods of my life.” Rajinikanth said.

“Not only me, He is the reason behind enormous number of people’s livelihood. I have worked with many directors but when KB sir enters the set, everyone including the light boy would stand up and wish him. That kind of magnificence and aura KB sir had. I have never seen that in any filmmaker. As a son, father, husband and as a filmmaker, he perfectly did all his roles as a human being. I wish for his soul to rest in peace in this 90th birthday of him” he added.

Previous articleUnknown Facts About “Karmaveerar Kamarajar” !!
Next articlePriest Who Raped Minor Wants Bail To Marry Her !!

Renowned actress Nazriya who predominantly appearing in Malayalam and Tamil films, on Tuesday, came up with a story in her official Instagram handle, expressing...