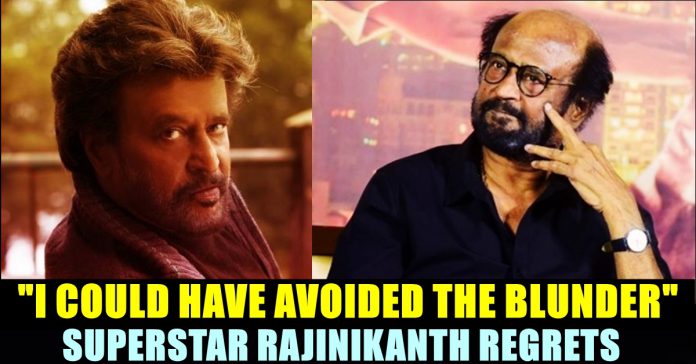 After all the furore that was created by the issue of Rajinikanth with the Madras high court, the actor now, came up with a tweet regretting his act. Rajinikanth felt that he could have appealed in the corporation instead of disturbing the court. “I could have avoided the blunder” said Rajinikanth who added an hahstag saying “Experience is the best teacher”.

However, The court warned of imposing cost on the actor rushing the court without giving adequate time for the authorities to dispose of his representation. While addressing the case, Justice Anitha Sampath said “Do you think that the court has no better things to do except directing the corporation authorities to dispose of your representation ?”

“File a memo for withdrawal before the end of today’s business hours. The court will record your memo and dismiss the plea” the court said. This incident has caused the aspiring politician a major embarrassment with social media trolls. Being the biggest film star of the country with the highest remuneration, Rajinikanth’s early morning walking video would go viral across the country. This feud between himself and Madras high court grabbed huge attention of the social media users. Rajinikanth also faced severe criticism from the twitter users for not voicing out when fuel taxes increased.

On the work front, Rajinikanth is about to finish shooting for his upcoming film “Annathe”. He is expected to launch his political party very soon. Comment your views in this tweet of Rajinikanth.