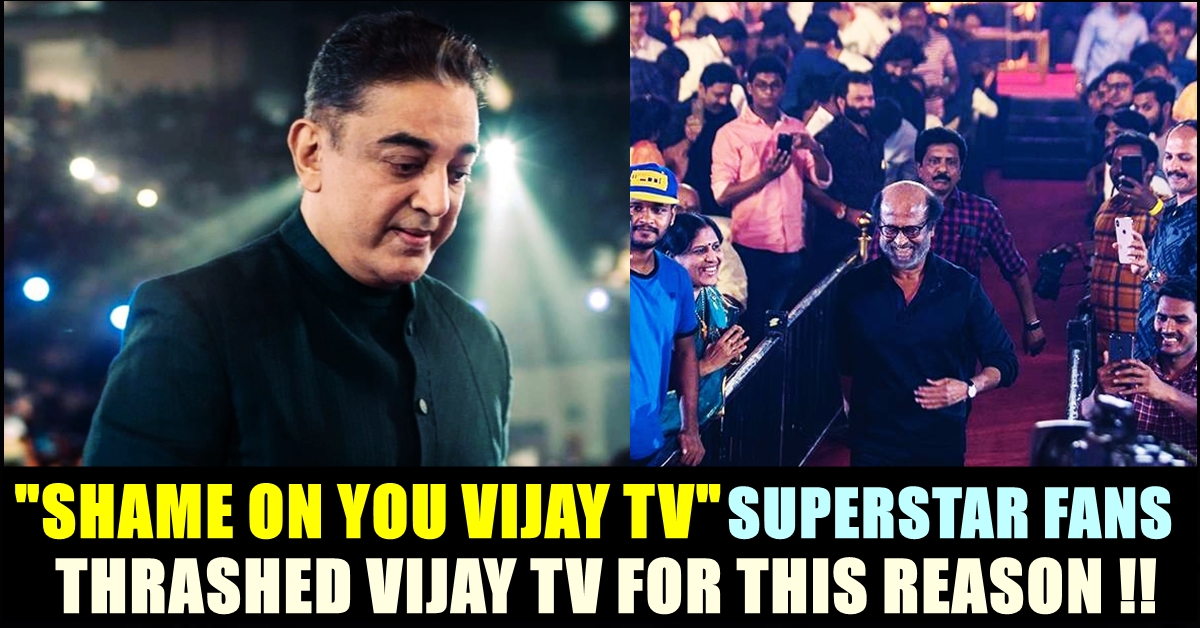 The show telecasted in Vijay Television on November 30 and December 1 between 8 PM and 12 AM. Many people watched the show and enjoyed it wholeheartedly as it praised Kamal Haasan, the actor for his journey in the film industry for 60 long years. The most loved part of the event is when Superstar Rajinikanth, a dear friend of Kamal Haasan gave his speech.

In his speech Rajinikanth praised Kamal Haasan by describing about various incidents he went through in his life awing the “Dasavatharam” actor. He even asked the fans of both the actors not to fight among themselves. Further the Superstar assured that their friendship will last forever though their policies and ideologies differ in politics.

However, fans of the actor are not happy with Vijay Television as they edited out the important part of the speech of their idol about chief minister Edappadi Pazhaniswamy. They even started trending various hashtags against the channel for not telecasting that particular part of the speech.

I never thought that @vijaytelevision would fear to telecast the entire speech of Thalaivar @rajinikanth. U would have edited a historical speech, but it has already reached millions of people. You spoiled a great name we had on u.
U too Brutus..#shame_on_vijaytv #kamal60

@vijaytelevision don't have guts to telecast our thalaivar @rajinikanth full speech then y u bought the show rights, it's totally waste better somether channel will get the show rights @ikamalhaasan #Kamal60

Never seen a more useless media than @vijaytelevision … in trying to edit @rajinikanth speech on admk you only proved how foolish you can be. #thalaivarspeech #Rajnikanth

In the event, Rajinikanth has took a sly dig at Chief Minister Edappadi Pazhaniswamy in the event. In his speech, Rajinikanth has said that miracles do happen in a human’s life. To elaborate on the same, he narrated the incident of Edappadi Pazhaniswamy becoming the chief minister of the Tamilnadu state and ruling it despite of the belief about his party being dismantled within few days.

Watch the speech which was edited out here :

What do you think on the fans of Superstar getting angry on Vijay TV ?? Comment your views !!