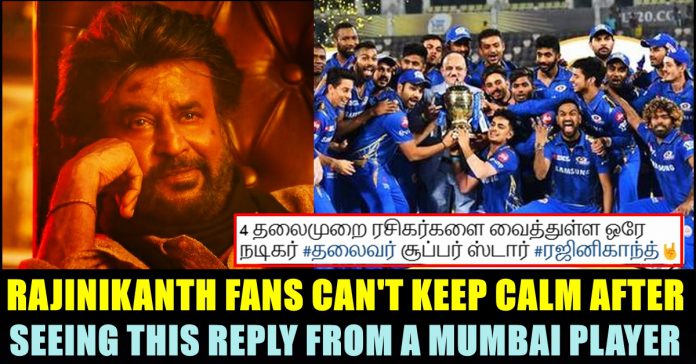 He was last seen in A.R Murugadoss’s “Darbar” and is about to appear in “Siruththai” Siva’s “Annaththe”. Director Siva is known for his commercial blockbusters such as Siruthai, Veeram, Viswasam etc. Fans are expecting for a “Padayappa” kind of commercial film from this combination which is evident in social media.

Meanwhile rumours are doing rounds that Superstar is going to act two more films with Lokesh Kanagaraj and Gautham Vasudev Menon respectively. About his Political entry, the Superstar actor said that he will announce about it, once he sees the “Revolutionary waves” among the people of Tamilnadu. Now, after a long time, fans of the actor, had something to celebrate in Twitter.

All rounder Krunal Pandya, brother of Hardik Pandya who represented Mumbai indians in IPL and represented India in few T20 internationals, has said that Rajinikanth is his favourite actor in South India. He said it in a chat session which was conducted by himself to interact with his fans and followers in Twitter.

To a follower who asked Krunal about his favourite south Indian actor, Pandiya said “Rajinikanth. Thalaiva.” This answer of the cricketer received more than 17,000 likes and several other shares. Fans of the actor, including director Desingh Periyaswamy who directed recent sensation “Kannum Kannum Kollayadithaal” overwhelmed in joy after seeing this reply from Krunal.

While delivering the speech regarding his political entry Rajinikanth said that he will select an appropriate candidate to be as Chief minister and will lead his party as party leader alone. Rajinikanth displayed his political entry speech to reiterate his statement on not being a CM-aspirer. “It was not in my blood. I can’t think of being a Chief minister at all. You all know the incident that happened in 1996 where many influential people asked me to contest as CM. That is not in my mind at all. I will remain as party leader” he said.

Comment your views on Krunal’s reply and the reactions of Rajiniknth fans !!

Previous articleHere’s How Internet Is Reacting To The Announcement Made By Our PM !!
Next articleFollowed By Gambhir, Yuvraj Expressed His Disappointment For Not Mentioning Him !!

Keerthy Suresh bagged the "Priceless Jewel of South cinema" award in the Wonder Women Awards conducted by Galatta youtube channel. The actress who is...

“Shame On Kollywood” Slams Meera Mitun For This Reason !!

The controversial Meera Mitun once again came up with an accusation against Kollywood saying that they are using her name for female characters to...