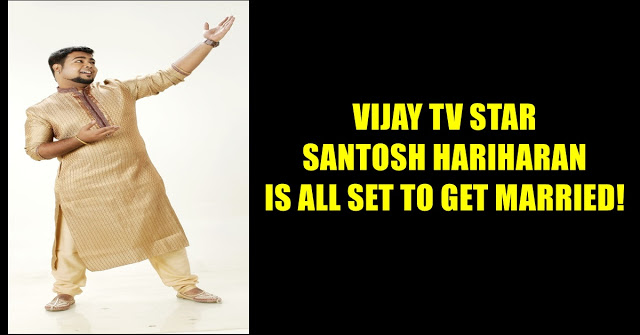 Super Singer Santosh Hariharan Is All Set To Marry This Year

The Airtel
Super singer, was quite known for his vocals, both in singing and controversial
talks. Recently he was seen supporting another singer from last season and
publicly criticizing the general public abashedly.
Read the
article here.
Now, the
singer is all set to tie the knot this year. Santhosh has put a status in
Facebook on May 28th, stating that he will get married this year and it has
caused quite a rage among his fans. While some of his fans are all excited for
the happy news, some female fans might have lost their minds hearing this 😛

Even when
all hell broke loose for him this year, the singer seems to be lucky enough to be
getting hitched very soon!
Well, we’re
happy for you Santhosh. Have a splendid married life. Just an advice though,
learn to talk appropriately to your to-be-wife, or you’ll be doomed for life 😉
Previous articleActor Surya Becomes Durai Singham And Attacks An Innocent Boy Without Investigating What Really Happened
Next articlePolice Officially Registers Complaint Against Actor Surya