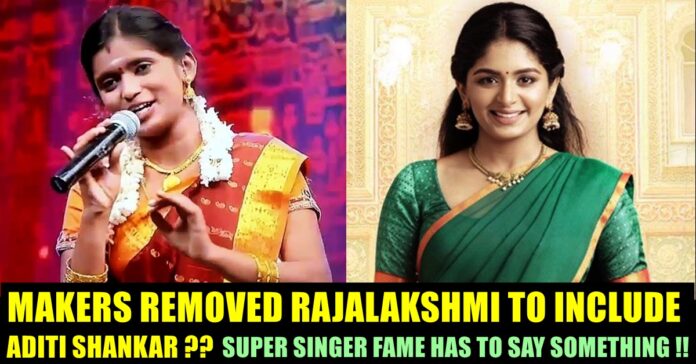 With “Viruman” releasing on 12th of August across the theatres in Tamil nadu, a report about Aditi Shankar who is going to make her debut as heroine in the Karthi starrer replacing Supersinger fame Rajalakshmi in a song surfaced in the internet platforms.

While fans were questioning why the change was made, Rajalakshmi reportedly released a statement saying that it is normal to change a singer considering the output of a song and requested fans not to react. She also said that Aditi had sung the song well and expressed her admiration over the emerging actress singing the song lively in the audio launch event in an effortless manner, according to reports.

“Viruman” is an upcoming film directed by Mutthaiyah of “Kutty Puli”, “Komban” fame. As said, the film marks the debut of Adhithi Shankar, director Shankar’s daughter and Yuvan Shankar Raja has composed the music. Karthi and Yuvan combo is known for their chartbuster albums such as “Paruthiveeran’, “Paiya” “Naan Mahaan Alla” and few others. Soori, Karunas, Rajkiran, Vaiyapuri, Ilavarasu, Prakash Raj, RK Suresh has joined the supporting cast of the film, cinematography and editing of which was done by Selvakumar S and Venkat Rajeen respectively.

The trailer launch event of the film took place recently in Madurai with the presence of fans and celebrities. With Suriya producing the film through his 2 D Entertainments, the film stars Karthi in the lead role and it is indeed a massive entry for the younger daughter of the Sivaaji maker. Adithi took part in the trailer launch event and received a positive reception from audience and leading celebrities such as Suriya as well.

During her speech, Aditi thanked the film’s cast and crew after getting blessings from her father by touching his feet. The actress also sung “Madhuraveeran” song from the film along with the film’s music director Yuvan shankar Raja, in front of the audience who were present. Two days after the event, a report surfaced saying that Super singer fame Rajalakshmi who sung chartbusters such as “Enna Machaan”, “Ayya saamy” etc, had lent her voice for the song “Madhuraveeran” initially.

However, the music crew led by Yuvan Shankar raja removed her voice and made Aditi to sing the song. The version which took place in the film was Aditi’s and it made fans to raise questions. However, Singer Rajalakshmi released a statement saying that such replacements are normal in cinema, as per the reports.

Rajalakshmi requested fans not to make a fuss about it and also said that Yuvan could have felt Aditi’s voice suits the song more comparing to the voice of her. Further, the singer expressed her admiration over Aditi performing the song lively in front of the audience.

Fan Page Uploaded A Funkiest Picture Of “Ever Handsome Maddy” !! His Reaction Was Just Hilarious !!

Madhavan is busy with Rocketry: the Nambi Effect, which will mark his directorial debut. The film is based on the life of scientist and...

“They Should Maintain A limit – Celebrity Points Out !!

Kollywood music composer James Vasanthan who has been observing the Bigg Boss show since day one, is an ardent supporter of Aari Arjunan, one...

Popular Television Anchor Sumanth Raman whose twitter bio saus that he is a Political analyst, came up with a tweet on Monday morning, criticizing...

Vani Bhojan Opened For The First Time About Working In “Mahaan” Movie !!

Emerging actress Vani Bhojan, scenes of whom got completely chopped out from the recently released "Mahaan" movie, opened for the first time about what...