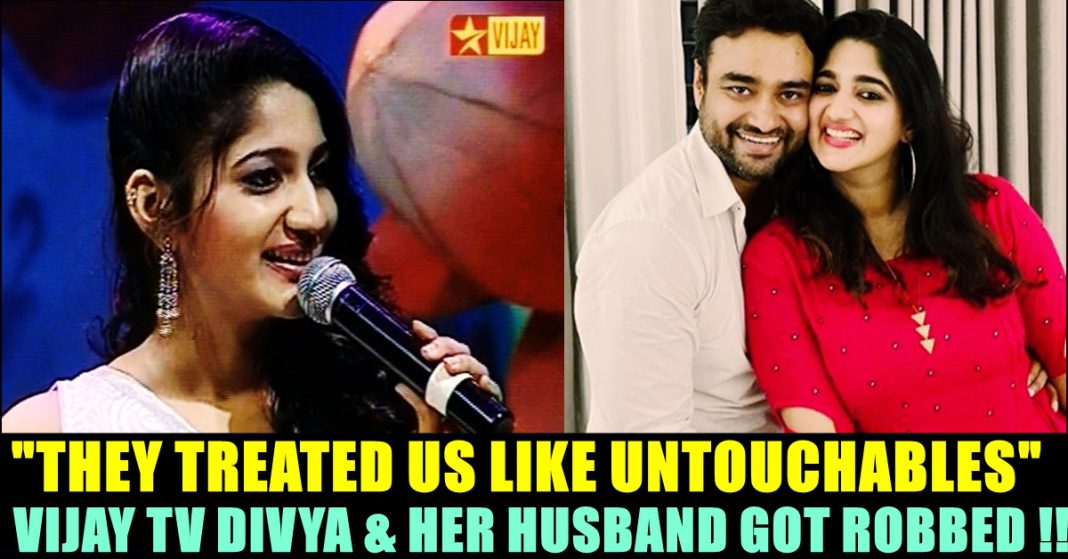 In a way of creating awareness to people who loves to travel, Singer Divya, who is known for hosting popular “Super Singer” show in Vijay TV, posted a series of stories in Instagram narrating how she got robbed by a stranger while travelling with her husband. Being a professional singer, Divya has sung some hit song of Tamil films such as “En Jannal vantha Kaatre” from Theeratha Vilayattu Pillai and “Dheemthanakka Thillana” from Villu.

Divya shared an incident she went through while traveling to Paris with her husband. She who went from Chennai to Bangalore to catch the Paris flight, says that she and her husband had 5 bags with them. After taking the flight from Bangalore, Divya says that she reached Paris 4 hours before which made her to think of putting her bags in a locker room to get a meal.

When her husband Shibu left her alone with 5 of their bags to look for a locker room, a stranger approached Divya and asked her if she can speak English. He asked her which train he has to catch to reach a city that Divya was not aware of. “I told him I didn’t know. He persisted having a conversation with me for one more minute showing his phone for directions, and when I told him I can’t help him and he could go to the assistance office at the station and showed him in which direction he needed to go he said thank you and walked away” said Divya in her story.

When Divya turned after a minute he left, she found one of her suitcase missing with a laptop bag. The bags she missed consisted the passports of both of them, 2 laptops, Chargers, an iPad, a kindle, a Bose headphone and two other headphones, an Airpod, all of her husband’s wedding wear and plenty of clothes, property documents, bank papers and more.

When the couple complained it to the security immediately at the station, they took so lightly and asked them to go to Police station. After running from post to pillar to find a functioning police station and waiting there for 4 long hours, Divya and her husband were asked to claim insurance by the Police. When Divya insisted on catching the culprit and check footages of CCTV camera in the station, the cop laughed at her.

The couple spent 30 plus hours in this and missed their train to their destination. “Having lost personal items worth lakhs of rupees, we just boarded our train back home” she wrote in her story. The singer further said that her husband lost years of his work on his laptop and still stayed calm throughout the situation. “all his important papers and documents his gadgets were lost and he is still saying ‘it’s ok we’ll get through it’ reads the story Divya added.

She who shared this story of her to create awareness among her followers asked them to watch while travelling. She warned of miscreants who care for no emotions and principles of other people. “We take a lot for granted. My lesson for today is don’t”. she said in her story.