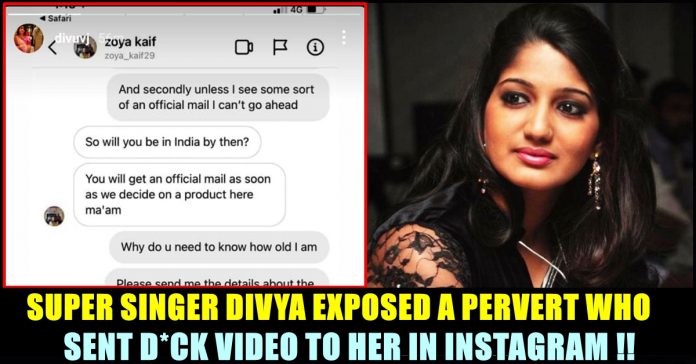 Super Singer Divya Exposed A Pervert Who Sent D*ck Video To Her In Instagram !!

Dhivya of Super Singer fame uploaded a series of stories in her official Instagram account on Monday and exposed a serial offender who sent obscene videos to her in the pretext of hiring her for a brand promotion. Posting the screen shots of the messages he sent to her, Divya alleged that he deleted most of his messages as soon as getting exposed. She wanted her followers to report the account which harassed her digitally and also exposed about one of her friends getting harassed in the same way.

Being a professional singer, Divya has sung some hit song of Tamil films such as “En Jannal vantha Kaatre” from Theeratha Vilayattu Pillai and “Dheemthanakka Thillana” from Villu. She also gained widespread fame after hosting the popular singing show “Super Singer” in Vijay Television. She who got married to Shubu Tharakan in 2019, is pretty much active in social media platforms, especially in Instagram.

She is currently enjoying 35k plus followers in Instagram after posting 547 posts. On Monday. she shared a series of stories exposing an Instagram account named “Zoya Kaif”. Sharing the screen shots, Divya sought the help of the followers to file against him. Initially, he who texted her in the pretext of demanding her service to promote a brand named “Jovees herbal brand”, failed to text her through the official account of the brand when Divya asked him to do so.

He who kept sending her messages on Instagram regarding the promotion, sent her a video of a guy’s pen*s and asked her whether she was satisfied, according to the story shared by Divya. He also deleted the messages he sent to her, However, Divya captured the last bit of the chat. She further asked her followers to block and report him.

“I have to give you the background of this story. I’m about to tell. BLOCK and REPORT& help me file a case against Ass* like this need to be brutally punished. This guy, pretending to be some Zoya Kait, has been sending me msgs on Instagram for a few weeks now asking me to collaborate with Jovees herbal brand. I thought this sounded very off from his texts and asked for a msg from the direct jovees handle. The rest is in this chat. And finally today he sends me a vidco of a guy’s penis followed by 2 messages asking me if I was satisfied. He has deleted every single msg he has sent me in the last few weeks and now the chat has only my replies. But luckily the last bit of the chat page today I had screenshotted. I would like cach one of you on my page to report this handle and if any of you know someone who can take action against ass* like this, please let me know Please search for zoya_kaif29 on Instagram and report!” Divya’s post read.

Check out the screen shots shared by Divya below :

Previous articleVideo Of Woman Comparing Girls With Gold Became A Subject To Severe Online Troll !!
Next articleNetizens Trolled Vanathi Srinivasan After Noticing This Detail In The Opening Ceremony Of Her MLA Office !!

We are less than 50 days away from the year 2020, the year in which Dr.APJ Abdul Kalam wished India to become a developed...